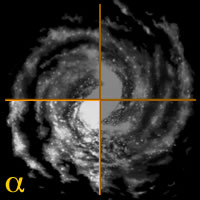 The Alpha Quadrant is the common designation for one-quarter of the Milky Way Galaxy. Its boundary in the region around the Federation is defined by a meridian passing through the galactic core and at least near the Sol System.

The Orion Arm, Perseus Arm and Sagittarius Arms of the galaxy are located in that quadrant.

Interstellar politics in the Alpha Quadrant in the 24th century were generally dominated by the United Federation of Planets, along with other regional powers including the Klingon Empire, Romulan Star Empire, Cardassian Union, the Tzenkethi, the Talarian Republic, and the Ferengi Alliance, all of which interacted on generally peaceful terms. Members of the Tholian Assembly, Breen Confederacy and the Xindi remained mostly isolated from the rest of the Alpha Quadrant populations. (

While only about 25% of the quadrant had been sufficiently explored, it was known to contain examples of shocking interstellar beauty and scientific wonder such as the Argolis Cluster, the Arachnid Nebula and the Badlands.