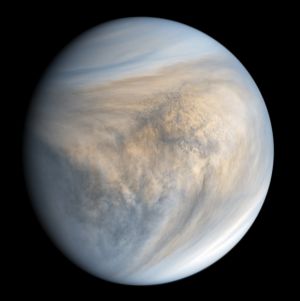 Venus as seen from orbit

Known for being the brightest natural object in Earth's night sky after the Moon, it is also the third smallest planet in its Solar System.

It has a synodic day length of 117 Earth days and a sidereal rotation period of 243 Earth days. Consequently, it takes longer to rotate about its axis than any other planet in the Solar System, and does so in the opposite direction to all but Uranus. (This means that the Sun rises from its western horizon and sets in its east.)

Sometimes called Earth's "sister planet" because of their similar size, mass, proximity to the Sun, and bulk composition. Even though Mercury is closer to the Sun, Venus has the hottest surface of any planet in the Solar System, with a mean temperature of 737 K (464 °C; 867 °F). This is slowly changing, due to terraforming.

Its proximity to Earth made Venus a prime target for early interplanetary exploration. It was the first planet beyond Earth visited by a spacecraft ("Venera 1" in 1961), and the first to be successfully landed on (by "Venera 7" in 1970). The planet's thick clouds render observation of its surface impossible in the visible spectrum, and the first detailed maps did not emerge until the arrival of the Magellan orbiter in 1991.

In the 24th century, Venus had a number of terraforming stations on its surface.