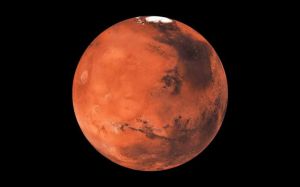 Mars (or Sol IV) is the fourth planet of the Sol system, located in Sector 001 of the Alpha Quadrant.

This planet has two small moons: Phobos and Deimos.

The first Human colony on Mars was established in 2103. The "Fundamental Declarations of the Martian Colonies" was an important step in the pursuit of individual rights.

Among the first colonists were relatives of Jean-Luc Picard. The Utopia Planitia Fleet Yards were established in geo-synchronous orbit above, where many famous starships,

Mars was also an important part in the defense of the Sol system and the location of the "Mars Defense Perimeter."

Mars was the first planet to be terraformed by Humans. Colonists originally lived within domed cities, while the verteron array was used to redirect comets and asteroids towards the Red Planet to impact in the polar caps.

This freed carbon dioxide, and released it into the atmosphere, increasing the planet's temperature and water volume.

By 2155, conditions in the lowlands of the Martian surface were sufficiently altered to allow Humans to roam freely without heavy environmental suits.