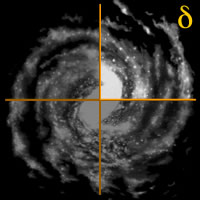 The Delta Quadrant is the common designation for one-quarter of the Milky Way Galaxy.

Its boundary is defined by a meridian passing through the galactic core and the Sol System, and a second meridian 90° perpendicular at the core.

The Crux Arm of the galaxy is located in that quadrant, as are the stars or star clusters M14 and M80.

Its closest point to Earth is located approximately 30,000 light years away.
Its first documented visit by Humans was on stardate 32629.4, when the USS Raven followed a Borg vessel into a transwarp conduit.
The first Star Fleet mission into the Delta Quadrant occurred during an inspection of the Barzan wormhole in 2366.
From the Alpha Quadrant, it would take a Federation starship roughly 30 years to reach the Delta Quadrant, even at maximum warp.

Political Relations as of the 24th Century

The major power in the Delta Quadrant, until 2378 was the Borg Collective.

Other major powers include the Vidiians, the Devore Imperium, the Kazon, the Voth, the Hirogen, the Hierarchy and the Malon.

For a brief time, Species 8472 had an established a presence until they returned to fluidic space.

At any give time, the political power of the Krenim Imperium depends largely on its temporal weapons, and as such its influence may be altered dramatically by its own manipulation of the timeline.

Millions of years before recorded Human history, it is speculated that the Voth may have left Earth and traveled to the Delta Quadrant, where they established a powerful and reclusive civilization.

Around the 3rd century, an epidemic known as Phage spread throughout the Vidiian Sodality, reducing a previously renowned culture to subsisting on organ piracy and slave labor.

In the 15th century, the Vaadwaur controlled many colonies and exerted influence across much of the Delta Quadrant, if not further.

In 2346, the Kazon sects were united in order to overthrow their enslavers, the Trabe.

Prior to 2371, an entity known as the Caretaker, while not claiming any specific territory, was a major factor in the socio-political climate near the outer rim of the Delta Quadrant, in the midst of Kazon space.