"A dream that became a reality and spread throughout the stars."

The United Federation of Planets (abbreviated as UFP and commonly referred to as The Federation) is an interstellar federal republic. It is composed of planetary governments that agreed to exist semi-autonomously, under a single central government, based on the principles of universal liberty, rights, and equality. They have also agreed to share their knowledge and resources in peaceful cooperation and space exploration. The Federation Star Fleet was incorporated into this government in order to serve the peace-keeping and humanitarian armada of the Federation, in addition to exploratory, scientific, and diplomatic functions. 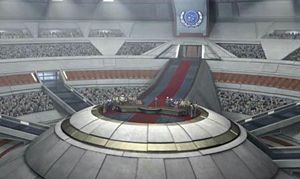 The founding ceremony of the Federation in 2161 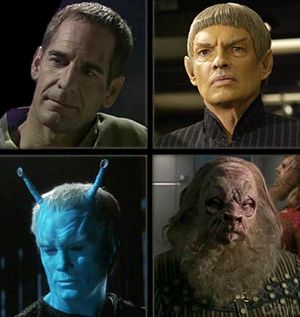 Four of the five founding species of the Federation (clockwise from top left): Humans, Vulcans, Andorians, and Tellarites. 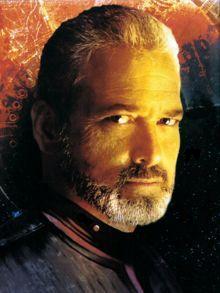 Alpha Centauran, one of the five founding species of the Federation.

The Federation was founded in San Francisco, Earth in 2161. The seeds of the Federation were planted during a temporary alliance in 2154, in the cooperative search for a Romulan drone ship. This search brought these species together for the first time, and they would late become the founder of the Federation: Humans, Vulcans, Andorians, Tellarites, and Alpha Centaurans. After the crisis, these four species remained together, founding the precursor to the Federation, called the Coalition of Planets. Other species soon joined: the Denobulans, the Rigelians, and several others. Over the next several years, ties between the members of the Coalition strengthened, becoming more structured, and in 2161, the Coalition became the Federation.

Although the Federation's intentions were peaceful, it was surrounded by belligerent powers such as the Klingon and Romulan Empires. As the Federation expanded through the admittance of more and more worlds, it came into conflict with these two powers. In the 23rd century, the Federation's main adversary was the Klingon Empire, with war briefly erupting between the two in 2267, before being halted by the Organians. However, tensions eased considerably towards the end of the century, with the Khitomer Conference of 2293 being a substantial turning point. This conference saw the signing of to the Khitomer Accords, which effectively ended hostile relations between the Klingons and the Federation.

At the start of the 24th century, the Federation began an unprecedented period of peaceful exploration of the galaxy, free of major conflicts. However, relations with the Romulans remained hostile, albeit at a low, 'cold war' level. There were also a series of local conflicts in the late 2340s, as the Federation came into contact with other militant races such as the Cardassians, the Talarians, the Tholians and the Tzenkethi.

In 2365, the period of peaceful exploration came to an abrupt end. The Federation encountered its single worst threat: the cybernetic pseudo-race known as the Borg. One of the most powerful and destructive forces in the entire galaxy, the Borg invaded the Federation two times in less than a decade. They were unlike anything the Federation had ever encountered, and were only foiled by chance and resourcefulness. The Federation was forcefully humbled in the fact that, in the vast, unexplored reaches of the galaxy beyond what they knew, there were threats that they could not even imagine. 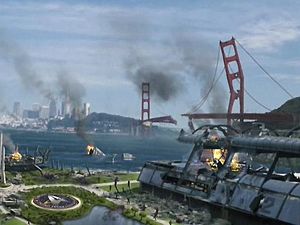 The Breen hit the heart of Star Fleet.

Then, in 2370, contact was made with the Dominion, the predominant ruling power over much of the Gamma Quadrant. After numerous skirmishes, misfortunes suffered by the Cardassian Union allowed for their eventual incorporation into the Dominion, and the subsequent Dominion invasion of the Alpha Quadrant. The Dominion/Cardassian forces were also joined by the reclusive but immensely powerful race known as the Breen. The ensuing war was the greatest crisis to be faced by the Federation, with the Federation forming an alliance with the Klingons and Romulans to defeat the Dominion. Although the Alliance eventually emerged victorious, many of the Federation's important member worlds, such as Betazed, Coridan, and Benzar, had been temporarily occupied before the Dominion's offensive could be turned back. Thousands of Federation Star Fleet vessels and millions of lives were lost, in what turned out be, as of the late 24th century, the bloodiest conflict in Federation history. The most devastating and demoralizing offensive occurred in 2375, when the Breen hit the Federation at its heart, with a surprise attack on Star Fleet Headquarters on Earth. 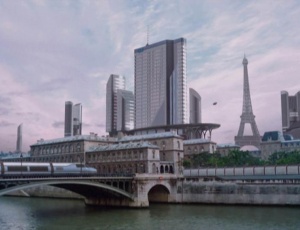 Office of the President of the United Federation of Planets

The Federation is located in the Alpha Quadrant of the Milky Way Galaxy. By the early 2370s, the Federation's territory was spread across 8,000 light years, with a membership of over 150 worlds and over 1,000 semi-autonomous colonies. Its major neighboring sovereignties were the Klingon Empire, the Romulan Star Empire, the Cardassian Union, and the Ferengi Alliance. Other neighboring sovereignties were the Tzenkethi, the Tholian Assembly, the Breen Confederacy and the Xindi.

The Federation's government is a representative republic, headquartered on Earth.

The exact nature of the government of the Federation has never been made clear on screen. From the information available, the United Federation of Planets would appear to be a constitutional representative republic, similar to that of the United States, prior to the 1860s.

The exact division of powers between the Federation government and the governments of its member worlds is unknown, though various episodes indicate the Federation placed great value on maintaining local sovereignty over local affairs. Member worlds were left to manage their own governance in accordance with their own traditions and local laws, so long as the general requirements of membership were met.

However, Federation law did grant the government emergency authority to override local governance and declare martial law on a member's territory.

Seal of the President of the United Federation of Planets

The Federation also maintains a number of executive agencies that assist in the administration of its affairs:

In addition, at least one rogue agency, known as Section 31, was known to have operated in the name of the Federation.

A sitting of the Federation Council

The judiciary was the branch of the Federation's government which was responsible for the administration of justice in the name of the state according to Federation law.

The fundamental political principles and laws of the Federation are derived from two important documents:

Note: This is not to be confused with the Federation Space Constitution, which is the document that determines how the game is to be played

Other rights and responsibilities for citizens derived from: 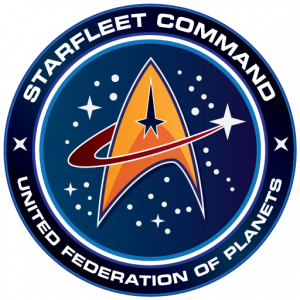 Star Fleet is the military and deep-space exploratory service maintained by the United Federation of Planets. Its principal functions include: the advancement of Federation knowledge about the galaxy; the advancement of Federation knowledge of science and technology; and the military defense of the Federation. In addition, it also plays a significant diplomatic role. As per its mandate of deep-space exploration, its personnel are frequently brought into contact with cultures and sentient species whose existences were previously unknown to the Federation. Federation Star Fleet officers therefore act as official representatives of the Federation. Federation Star Fleet vessels are frequently used to ferry ambassadors on diplomatic missions.

The basic unit of currency backed by the Federation is called the Federation credit. This currency is used in both internal and external transactions. Federation worlds who possess resources unavailable elsewhere were obligated to provide consignments of these resources in times of emergency.

Individual Federation worlds are free to employ their own economic models. For example, the planet of Bolarus IX utilizes currency-based economics. Conversely, by the 24th century, economic practices on Earth were able to exclude the need for an established currency.

Admittance into the Federation is either by invitation, or successful petition of a world or civilization desirous of joining. In the second case, membership is granted only upon satisfaction of certain requirements. Firstly, the government of the prospective member is required to submit an official petition to the Federation Council, outlining its desire to join. A lengthy, thorough investigation of the prospective member's culture then follows. This investigation can take several years, and is done to ascertain whether or not the culture genuinely shares the values of the Federation: values of benevolence, peaceful co-existence and co-operation, the rule of law, and equal rights and justice.

Even before the investigation, the prospective member has to meet certain requirements. These were as follows:

This article has been listed as the Article of the Week for the week beginning 20908.30