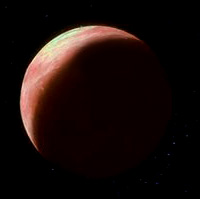 Planet is the common name for a certain type of celestial body orbiting a star.
They occurred in a great variety of different compositions, masses, and surface conditions. The exact definition of what constituted a planet varied among cultures.

Within the United Federation of Planets, celestial bodies with diameters below 100 kilometers are usually classified as planetoids or asteroids rather than planets.

The final appearance of a planet depended on its formation process, which meant where and under what circumstances it formed. Planets could accumulate gigantic atmospheres, exceeding their original size and mass, or they could rest without any atmosphere at all. With a sufficient mass, a planet was able to accumulate so much gas, that it started to undergo nuclear fusion, turning into a protostar. In this state, it began to emit energy, as its core temperature and density increased. Planets could also be changed to a Class M environment by terraforming.

The Federation had numerous different classifications for planets depending on their mass, composition, surface environment and atmospheric compounds.