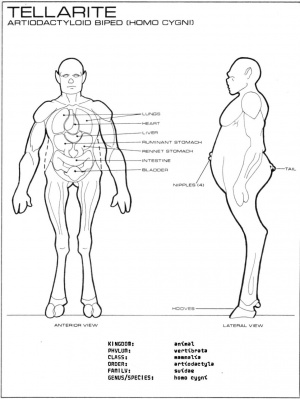 The anatomy of a Tellarite. 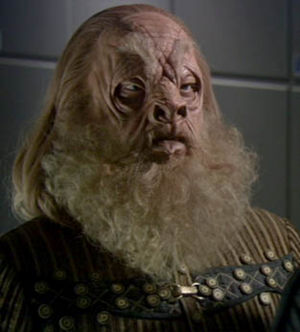 The Tellarites are a warp capable species from the class-M planet Tellar Prime, located not far from the Sol System. In 2161, they became one of the founding races of the United Federation of Planets.

Tellarites are a sturdy humanoid species with distinguished snouts. They wear beards and their hands are sometimes hoof-like in appearence.

Tellarites consider canine to be something of a delicacy. They find human room temperature to be cold, indicative of a higher body temperature.

Whereas labored breathing is considered a "symptom" (e.g. the patient notices it him/herself) and not a "sign" (e.g. only a doctor notices the sign during a medical examination) when affecting most species, it is regarded as a "sign" when Tellarites come down with it.

Tellarites are known to be an impatient people. They are also known for their "stubborn pride". They have a propensity toward strong emotion. They enjoy a good argument, which is even considered a sport on Tellar, must like Human debate teams. Tellarites often begin an interaction with a series of complaints; this is how they start arguments with someone they meet. If they have nothing to complain about they will simply insult the person. Because of their ability to argue, Tellarites make excellent politicians.

Tellarites sometimes take mud baths. If this is a reference to wallowing, it may be intended as an extension of their likeness to pigs.

Tellarites are warp-capable and were involved in inter-species communication by the 20th century. In 1957, a Tellarite freighter picked up the distress call of a Vulcan ship that had crash landed on Earth, near Carbon Creek, Pennsylvania. They passed this information onto the Vulcan High Command.

In April 2152, a passing Tellarite vessel directed the Earth starship Enterprise, suffering severe damage after an encounter in a Romulan minefield, to an automated repair facility. Subcommander T'Pol then stated that Tellarites are generally considered trustworthy.

In November 2154, a Tellarite delegation led by Ambassador Gral was being transported to the planetoid Babel by the Enterprise to resolve a long standing trade dispute with the Andorians. The original conference agenda covered only trade regulations for the sector. However, a Romulan plot to destabilize the region had the opposite effect and created a temporary alliance among the Andorians, Vulcans, Humans, and Tellarites. The proceeding conference later helped bring peace to the strained Tellarite-Andorian relations.

In 2155, a delegation of Tellarite ambassadors was sent to Earth to join in talks of forming a Coalition of Planets. Minister Nathan Samuels joked that the new universal translators were working a little too well when it came to talking to the Tellarites.

In 2161, Tellar would become a founding member of the United Federation of Planets along with Earth, Andoria and Vulcan. As a result, the Tellarites hold a seat on the Federation Council and serve as Star Fleet officers.

In 2267, the planet Coridan sought admission to the United Federation of Planets. However, due to the wealth of dilithium available on Coridan and the presence of illegal mining operations, Coridan's admission was a controversial subject between Tellarites and Vulcans. The Babel Conference was convened to settle the matter and ultimately approved Coridan's admission. Tellarite Ambassador Gav was among the delegates to the Babel Conference but was killed by an Orion infiltrator in Andorian disguise onboard the Federation starship USS Enterprise. On the conference, Ambassador Sarek of Vulcan was ultimately credited with achieving the consensus towards admitting the planet to the Federation.