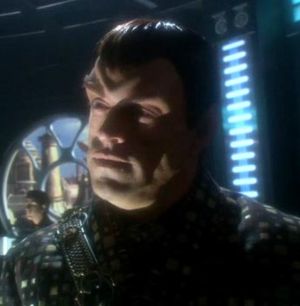 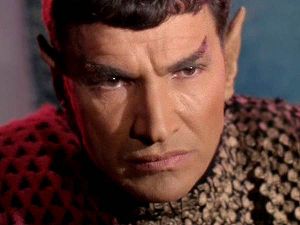 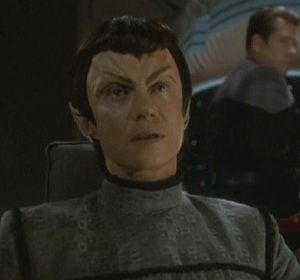 Note: This article describes Romulans from the viewpoint of the Federation and gives a general overview of the species. Please see the official section of the Romulan Star Empire for more detailed information.

The Romulans are biological cousins of Vulcans, as they are descended from those who rejected Surak's reforms during the Time of Awakening. The Romulan Star Empire is the Romulan state and one of the major powers in known space.

Like Vulcans, Romulans have pointed ears, eyebrows that are arched and upswept, and copper-based blood that is green when oxygenated in the arteries and is copper or rust colored when deoxygenated in the veins. Most Romulans have two brow ridges above the bridge of their nose, forming a V-shape on the forehead. However a minority of Romulans lack the ridges, making them outwardly indistinguishable from Vulcans.

Despite their common ancestry there are also many subtle internal physiological differences between Vulcans and Romulans. This is evidenced in Dr. Beverly Crusher's failed attempt to treat a Romulan, Patahk, who had suffered advanced synaptic breakdown, with the methods used to treat Vulcans.

Romulans lack the rigorous mental disciplines developed by the followers of Surak. They are a passionate people, easily moved to extreme emotions. They possess the innate touch telepathic abilities of their Vulcan ancestors but have not developed them, as Romulan culture values privacy and disdains telepaths. Romulans can feel strong emotion when touching others, though they have no control over this ability, which is why physical contact is frowned upon among Romulans with the exception of family or other loved ones.

There have been numerous instances of Romulans successfully mating with other species, as evidenced in Sela (Human/Romulan), Ba'el (Klingon/Romulan), and the grandfather of Simon Tarses (Human/Romulan).

While Vulcans possess much greater physical strength than most humanoids, Romulans are only slightly stronger stronger than normal humans, due to their continuing evolution in the Earth-like gravity of Romulus.

The Terothka virus is a disease unique to Romulan physiology. Romulans are also susceptible to Tuvan Syndrome.

For a more detailed discussion of Romulan anatomy and physiology, please go here.

In Romulan society, military/political rank influences social standing. Because Romulans are members of a militant civilization, who consider defending the Romulan Empire and their own personal honor of foremost importance, military service and its accompanying rank are decisive factors in determining social eminence. However, while the military plays an important role in Romulan society, it is the Romulan Senate that controls the government.

The current highest Romulan rank is that of the Praetor, who presides over the Romulan Senate. The Praetor heads the Continuing Committee, which is comprised of high-ranking Senators and other elite individuals. The Continuing Committee runs the daily affairs of the Empire, while the Senate establishes laws and policies. The Emperor or Empress serves as head of state in a largely ceremonial role.

By the 24th century, the Romulans were dependent upon the Tal'Shiar, the Romulan Secret Police, to maintain order and stability among both civilians and the military. The Tal'Shiar is known for its brutal tactics, which include routine kidnapping, torture and assassination. Many Romulans fear even expressing dissenting opinions as to not spark the interest of the Tal'Shiar. There is also some degree of tension between the military and the Tal'Shiar.

Romulan society is based upon a highly structured caste system. Unlike most of the highly evolved species in the Alpha and Beta Quadrants, Romulans still practice slavery, and frequently use conquered races for forced slave labor and shock troops.

Romulans tend to be highly xenophobic, engaging in extended periods of isolationism, and can be perceived as outright racist to other species, believing themselves to be superior. At least some Romulans believe that one day the Romulan Empire will rule the entire galaxy.

Romulan society does not appear to be gender biased. Both males and females command warships, can obtain high political positions and can be members of the Tal'Shiar.

The Romulans lack the rigorous mental disciplines developed by the Vulcan followers of Surak. However, like the Vulcans, the Romulans have surrendered unrestrained violence as a way of life. In the case of the Romulans, this has been replaced with a complicated set of social and cultural rules that govern their actions. As a species, the Romulans are generally thought of as duplicitous and untrustworthy by outsiders.

Romulans practiced the execution of state criminals, by means both painful and unpleasant. Prior to the presenting of the charges, the Romulans allow the accused a Right of Statement.

Reluctance to rely on overt hostility generally leads the Romulans to play a waiting game with their opponents, attempting to manipulate an adversary into breaking - or appearing to break - an agreement so as to give them a solid justification for striking.

They are also well known for fearing disgrace over death. With this frame of mind, Romulan parents dispose of any newborn infants carrying birth defects as the alternative would mean a waste of resources.

The totalitarian nature of Romulan society, in which dissent is often a crime and Tal'Shiar agents masquerade as citizens, has led many Romulans to be extremely paranoid.

A common Romulan greeting/polite phrase is "jolan'tru", which is used both in the context of greeting and goodbye, much in the same way as "aloha" is used in the Hawaiian language.

In the 24th century, a dissident movement began to gain momentum, based on the desire to learn about Vulcan and Vulcan ideals. Their ultimate goal was the reunification of the Romulans and Vulcans. Ambassador Spock was deeply involved in this movement. The movement was eventually crushed on Romulus itself, and many of its followers took refuge on the remote colony world of Ecurai, where they established a separatist government in the early 25th century and declared independence as the Democratic Romulan Republic. The Empire has refused to recognize the declaration and considers the Republic as rebels. A civil war has ensued, though neither side has managed to gain the upper hand. Non-reformist dissidents and political exiles have also flocked to Ecurai, diluting the reformist influence on the Republic's government.

In keeping with their isolationist tendencies, there are few Romulan mercenaries, soldiers of fortune, bounty hunters, or other similar roles. While many arguably belligerent and militaristic species, such as Nausicaans, Breen, and even Klingons often sell their fighting skills to the highest bidder, Romulans are rarely, if ever, seen involved in such activities. This is due to the superiority complex of most Romulans, many of whom would likely find such work beneath them and would prefer to serve the Romulan Empire in some capacity. Romulans also seem to be somewhat indifferent to simple financial and material gain, and tend to find the idea of serving the Empire more appealing. They are, however, known for commonly using hired assassins, such as the Flaxians to conduct their offworld "justice."

Emblem of the Romulan Star Empire.

Romulans were aware of humanity for some time before Earth knew of them. Infiltrating the highest levels of the Vulcan High Command, the Romulans were impressed and confused by humans. The Enterprise NX-01 inadvertently encountered a Romulan minefield, drawing even more Romulan attention. Even after fighting the Earth-Romulan War, it wouldn't be until the 23rd century that humans would see them and realize it.

After the Treaty of Algeron went into effect, the Romulans retreated into isolation once again, but they never lost their concern over humanity. After an attack by the Borg on a Romulan outpost, which they initially suspected the Federation of committing, the Romulans resurfaced, declaring "We are back."

Relationships with other species

A Cardassian embassy existed on Romulus for a time, and Elim Garak was "employed" there as a "gardener." The two species maintained friendly diplomatic relations and cooperated militarily in an attempted attack on the Dominion in 2371. The joint effort of the Obsidian Order and the Tal'Shiar, however, failed, and the Romulans had cut all ties with the Cardassians by the time they entered into the Dominion War. The Romulan Empire again established relations with the Cardassians after the war.

One common familiar saying among the Romulans is "Never turn your back on a Breen." While this statement could be taken as partially humorous and not in itself indicative of hostilities between the two species, the Breen Thot's apparent condition that the Breen be given Romulus in exchange for their help in the Dominion War seems to suggest there is some degree of unfriendly history between the two. The Romulans currently have no relations or contact with the Breen.

Romulans distrust Vulcans most of all. It is now known that Romulans had infiltrated various positions of the Vulcan High Command in the 22nd century. How long they had been in these positions is somewhat unclear, as is how this came about in the first place.

Klingons and Romulans once shared a brief, and likely strained, alliance. However, after a number of developments, including the Khitomer Massacre, the Klingons developed a deep seated hatred for the Romulans, and the Romulans are arguably the species that Klingon society in general despises most of all.

Romulans are the descendants of 80,000 Vulcans who rejected the pacific teachings of Surak in favor of a militarist approach to defend the planet from interstellar threats. Led by S'Task, these militarists defeated an Orion invasion force while the pacifists stood by and did nothing. Finding themselves in an overwhelming minority to the pacifists and disagreeing with their enacted reforms, S'Task and his followers left Vulcan in 370 CE to search for a new homeworld.

Calling themselves the Rihannsu, or "the Declared," they began a long and arduous journey that saw their numbers dwindle to 18,000 before they arrived at a suitable planet in 533 CE. Known in English as Romulus, they named it ch'Rihan in their own language, which roughly means "homeworld of the Declared." After a civil war that reduced their ranks to only 9,000, the current foundations of the Romulan government were established in 630 CE, leading to a long era of internal peace and the growth of empire.

Some of those who left Vulcan did not follow S'Task all the way to Romulus, instead establishing settlements on the planets Calder II, Dessica II, Draken IV, Yadalla Prime and Barradas III and creating an offshoot civilization called the Debrune, which later died out.