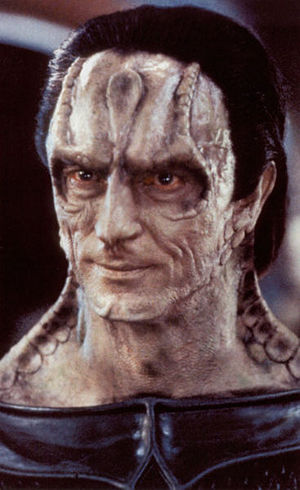 The Cardassians are a humanoid species from the Alpha Quadrant. They are native to the planet Cardassia Prime, capital world of the Cardassian Union.

The Cardassians evolved from reptilian ancestors and they prefer a darker, hotter, and more humid environment than Humans.

They have straight hair that varies in color from jet black to, less frequently, dark brown. Males typically slick their hair back, while the women have more varying hairstyles. As with Humans, their hair turns white with age. Furthermore, a Cardassian's hearing is not as acute as a Human's.

Medical conditions to which Cardassians are susceptible include Coleibric hemorrhage and Yarim Fel Syndrome.

The ideal Cardassian life is one of complete loyalty and servitude to the State. The Cardassian government is assumed to be omniscient, omnipotent and benevolent. In a sense, when the Cardassians abandoned their spiritual ways and began their expansion throughout the Alpha Quadrant centuries ago, they simply applied a twisted form of their religion to their political philosophy.

A typical example of the Cardassian approach to life is found in their criminal trials, in which the verdict is always determined beforehand, and the purpose of the proceedings is not justice in the human sense but bringing the offender to recognize the power and benevolence of the State. The typical Cardassian approach is direct, simple and ruthless, uncaring about how many aliens -- or Cardassians -- are trampled on in the interests of the state. Cardassians pride themselves on their attention to detail and memories. They have no interest in science for its own worth, and demand that scientific projects, like everything, serve military benefits.

In the aftermath of the Dominion War, and the utter devastation it created for Cardassia, it remains to be seen whether a new philosophy may emerge. One of the greatest questions facing the Alpha Quadrant is whether Cardassia will remain entrenched in its old, bloody system or if a reform to a more Federation-style democracy is possible.

Family is considered a Cardassian's greatest asset, with three or more generations in one home. Similar to some other cultures, Cardassians expect their young to remain loyal to their families; an order from one's mother or father should be obeyed. Sometimes, Cardassian children will visit their parents at work to see what they do (e.g. a torture chamber). On the other hand, Cardassian orphans have no place in their society. To be looked upon favorably, one must also take care never to show weakness; indeed, the irony in the Human tragedy Julius Caesar was lost on Garak, who thought Caesar a fool for not suspecting that Brutus would betray him.

The education system implemented on Cardassia dictates that intellectual pursuits begin at the young age of 3 or 4. Every Cardassian is raised with an appreciation of fine arts and culture, though the government may not have always been so open-minded in its policies. Educational attainment is regarded as a major source of social status and the source of creativity in Cardassian society. The Cardassians are known for their photographic memories, while some even have the ability to resist a Vulcan mind meld.

Cardassian society has the most rigid and, to the Federation, incomprehensible of all legal systems. Every suspect is guilty before even appearing in court, their sentence already spelled out - almost always death. No prisoner ever escapes the death penalty, and only very tempting incentives can change the sentence to a lifetime in a labor camp. The criminal is given a Conservator, equivalent to a public defender, except that the Conservator is not supposed to win but to prepare the criminal for a moving confession of guilt on the floor of the court. The accused is also permitted an advocate, the Nestor, to advise them during the trial. The Chief Archon, or judge, of the court plays to a televised audience, her duty not to judge the prisoner's innocence or guilt, but rather to give an emphatic display of the futility of crime on Cardassia and reinforce the public's trust in the justice system.

Unlike Humans, Cardassians don't avoid or try to slow the aging process, instead welcoming old age and the power and wisdom it denotes. Aging is seen as a sign of strength and power in Cardassian society; for example, the 40th birthday of a Human, a dreaded event in their culture, would thus be cause for celebration for a Cardassian.

Another aspect of great importance in Cardassian culture is to outlive your enemies. Enabran Tain told his son on his death bed "A man shouldn't allow his enemies to outlive him". When an elderly family member is dying, they will generally enact the tradition of Shri-tal, thus passing on all of their secrets to another family member so they may use them against the dying one's enemies.

The Cardassian design ethic shows a preference for dark colors. Their architecture tends to have things in sets of three, and to have a sense of symmetry. Designs favor trapezoids instead of squares, and ovals instead of circles. Cardassian architecture also typically has the commanding officer's office above the rest of the operations center. This is so that all others present are forced to look up at the commander with respect.

Cardassians, much like the Dominion, are known for their punctuality.

Men, as well as women, may serve in the military, though it may be that only men are drafted. Women, on the other hand, are the majority in the sciences.

Cardassians give their first molar to the Cardassian Bureau of Identification at age ten.

In 2367, Cardassian technology was notably inferior to that of the Federation. A Cardassian warship was easily destroyed by the USS Phoenix, even when the warship had the ability to penetrate the Phoenix's shields. Cardassians on board the Enterprise-D made several comments about the superiority of Federation technology, notably the ship's transporter technology, as well as the vessel's sensors, which were able to detect the classification of Cardassian ships at long ranges, an ability that Cardassian sensors did not have. However, at this time, Cardassians did possess the ability to mask the contents of their supply ships from the Enterprise's scans.

Considering that the Cardassians are a militaristic society, it can be assumed that, despite their vessels' technological shortcomings, they are able to be formidable opponents in most engagements. This is probably why the Federation-Cardassian War proved to be a stalemate as opposed to an easy victory for the Federation, as well as why the Cardassians were able to cause a stalemate in the later conflict with the Klingons.

The governing body of Cardassia is the Cardassian Union. The elected Detapa Council has ruled for centuries but, over the years, the Council's power was usurped by Cardassian Central Command, the military branch of the government, transforming Cardassia into a police state similar to Nazi Germany or the Soviet Union. By the late 24th century, the Central Command's control was slipping due to civilian protests and the Cardassian dissident movement. The Obsidian Order had been given limited autonomy and thus took a very active role in Cardassians' lives, but it was forbidden from raising an army and its autonomy could be revoked at any time.

The latter half of the century saw significant changes. A secret joint operation between the Obsidian Order and the Romulan Tal Shiar, intended to cripple the Dominion, raised an armada of ships armed with cloaking devices. Led by Enabran Tain, the plan nearly succeeded but was sabotaged by a Founder infiltrator. The joint Cardassian-Romulan fleet was utterly destroyed at the Battle of the Omarion Nebula, and the staggering losses suffered by the Order combined with public outcry caused its downfall.

Without the Obsidian Order to keep the populace in line, the dissident movement eventually succeeded in securing control of the government. A civilian uprising reinstated the power of the Detapa Council, but this drew the attention of the nearby Klingon Empire. Claiming that the Detapa Council included Founders, Chancellor Gowron (who was himself under the influence of a Founder infiltrator) initiated the Klingon-Cardassian War in a thinly veiled attempt to seize control of Cardassian territory. This tension, combined with terrorist pressure from the Maquis in the Demilitarized Zone, resulted in utter chaos... until Dukat secretly negotiated Cardassia's entry into the Dominion.

When Gul Dukat completed negotiations with the Dominion in 2373, the Detapa Council ceased to exist altogether, just as the Obsidian Order had two years prior. Placed as the leader of the Cardassian Union, Gul Dukat had control over the majority of Cardassian affairs. However, he was forced to work under the regulations of the Dominion. During the first three months of the Dominion War, Dukat generally controlled the Cardassian and Dominion fleets, with Weyoun, a Vorta, overseeing his decisions. Dukat was able to maintain an equal standing with Weyoun, though both were subjected to the unquestionable orders of the Founders.

After Dukat's breakdown into insanity due to the death of his daughter, Tora Ziyal, Damar was placed in command of the Cardassian people. Since the new leader lacked the self-confidence and leadership skills of his former mentor and predecessor, Weyoun was able to take more and more control over the Cardassian people, with Damar becoming little more than a figurehead. Eventually, Damar had absolutely no say in any political decisions. This became blatantly obvious when Weyoun made territorial concessions to the Breen in 2375 in order to convince them to join the Dominion. Eventually, the Cardassians rebelled under Damar's leadership near the end of the Dominion War, allowing the Federation Alliance to gain a decisive advantage during the Battle of Cardassia and eventually win the Dominion War. The political future of Cardassia is left unknown at the end of the war, with the Dominion forced to surrender their governance over them.

In its ancient history, before Cardassia became a military dictatorship, the Cardassian society was known as the Hebitians. It was home to fine art and beautiful architecture. Once the Hebitian civilization fell into decay from lack of natural resources, millions of Cardassians were starving and the planet was subjected to utter anarchy. Though the Hebitian society and way of life eventually became extinct, the remaining Cardassians turned to the military to solve their problems. This began the Cardassian policy of expansion into the galaxy, to provide the much-needed natural resources to sustain its population.

During the 24th Century, Cardassians were involved in three cataclysmic wars. The first major war was with the Federation in the mid-24th Century, which ended in a turbulent peace treaty. A second war broke out when the Klingon Empire launched an unprovoked and unjustified invasion into Cardassian territory after a successful rebellion had overthrown the military's rule. The Klingons believed the coup to be a result of Founder infiltration, and therefore attempted to take over the Cardassian Union. The coup was in fact successful due to the collapse of the Obsidian Order after the Battle of the Omarion Nebula. This war devastated Cardassian infrastructure, with a great loss of life and territory.

The third and largest of these conflicts was the Dominion War. In order to drive out the Klingons from their territory, destroy the Maquis in the Demilitarized Zone and regain Cardassia's status in the Alpha Quadrant, Gul Dukat signed a treaty making Cardassia a member of the Dominion. Cardassian and Dominion forces proceeded to push the Klingon fleet out of Cardassian territory and wipe out the entire Maquis movement within a few days. While initially the alliance with the Dominion seemed to be beneficial to Cardassia, in the long run it resulted in an exponential loss of life ships. Near the end of the Dominion War, Cardassia Prime was struck by Jem'Hadar raids and orbital bombardment from the Dominion and Breen forces in orbit of the planet, which attempted to wipe out the Cardassian species entirely for their betrayal.