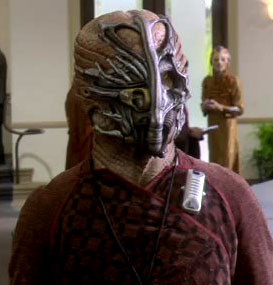 The chancellor of Coridan 2151

The Coridans, also known as Coridanites, are a humanoid Federation species hailing from the dilithium rich planet Coridan located in the Beta Quadrant. The Coridans traded with the Orions for centuries prior to 2155.

The planet Coridan had a population of three billion in 2151. Most of the population was concentrated in several cities in the equatorial region. The capital city was surrounded by a shantytown, and there were almost as many bio-signs outside the city as there were within it. In 2151, the Coridans had the largest starship construction yards in the sector. However, the planet was also embroiled in a conflict between rebel forces, supported by the Andorians, and the government, backed by the Vulcans. The Vulcan agenda was to keep the planet's chancellorship stable, which in turn assured its dilithium exports to Vulcan.

In 2152, Coridans were represented at the Interspecies Medical Exchange conference on Dekendi III.

In 2155, Coridan took part at the talks on Earth to form a Coalition of Planets. Here the Coridans rejected the Tellarite proposal of an trade embargo against the Orion Syndicate.

The Babel Conference in 2268 was to consider their admission into the United Federation of Planets. The planet was considered underpopulated at that time, making it susceptible to illegal mining operations. Federation membership would provide the planet with protection under interstellar law.

Mining operations were maintained there by the Orions and Tellarites, among others, a concern that led some to think they should be denied Federation membership. Ambassador Sarek of Vulcan spoke in favor of admittance, and was given credit for passage of the measure. Coridan joined the Federation that same year.

In 2374, during the Dominion War, the Coridan's dilithium mines were attacked by the Jem'Hadar, as they made the planet a strategically important target.