A group of Borg drones, lit by their eyepieces

A trio of Borg drones, including one of Klingon origin

The Borg were a pseudo-race of cybernetic beings, or cyborgs, from the Delta Quadrant. No truly single individual existed within the Borg Collective, as they were linked into a hive mind. Their ultimate goal was perfection through the forcible assimilation of diverse sentient species and knowledge. As a result, they were among the most dangerous, most feared races in the galaxy.

The physiology of each Borg drone varied according to the species from which it was assimilated. Drones were typically humanoid, although the Collective has demonstrated a willingness to assimilate non-humanoid life forms.

Upon assimilation, a drone would cease to grow body hair and develop a corpse-like, grayish skin coloration. Cybernetic implants would be either surgically attached to the body or grown internally by nanoprobes injected into the bloodstream. The nature of these implants varied from drone to drone, depending on its intended function. In certain cases, parts of the body such as an eye or an arm would be amputated altogether to make room for the cybernetics. The implants of a fully assimilated drone allowed it to function for extended periods without shelter, food, water, or even air. A drone's only requirement would be a supply of energy to maintain the implants that in turn maintained its biological functions. This energy would be supplied during regeneration cycles within a Borg alcove.

Borg drones were equipped with a myriad of technologies integrated into their bodies which enabled them to perform their duties within the Collective, several of which were universal to all drones. A neural transceiver kept them connected to the hive mind. A personal force field protected each drone from most energy-based attacks. As of 2373, each drone possessed a pair of assimilation tubules embedded in one hand for the purpose of instantly injecting individuals with Borg nanoprobes.

Drones also contained fail-safes designed to deactivate and even vaporize their own bodies, thereby allowing the Collective to eliminate damaged or dead drones without leaving remains to be exploited by outsiders. The captured drone Hugh/Third of Five also made comments indicating that this vaporization may have been a form of resource reabsorption. One of these fail-safes was intended to automatically deactivate drones experiencing strong emotional states, which the Borg interpreted as a sign of disconnection from the hive mind.

Borg technology was a combination of technologies assimilated from other cultures and technology developed within the Collective in order to overcome obstacles to its goals. When confronted by a problem it could not solve with its existing resources, the entire Collective would work in concert to consider all possible solutions and implement the one determined to be the most efficient. By applying the unique skills of each drone to a task, the hive mind could engineer new technologies at a pace that would astound an individual.

Borg vessels were highly decentralized, with no discrete bridge, living quarters, or engineering section. Each ship was collectively operated by its complement of drones, under the general direction of the hive mind. Owing to the Collective's disregard for art, the architecture of Borg ships took the form of basic shapes such as cubes and spheres.

Each Borg spacecraft was equipped with a vinculum to interconnect its crew, which was in turn connected to a central plexus that linked the ship to the Collective. In addition to warp drive, vessels were fitted with transwarp coils that could achieve even greater speed by opening transwarp conduits. When critically damaged or otherwise compromised, a Borg ship would self-destruct to prevent outsiders from studying Borg technology.

A Borg skeleton on a ruined planet

A Borg vessel traveled back in time from 2373 in an unsuccessful attack on Earth in 2063. Drones which survived this defeat were discovered and reactivated by Human scientists in 2153, and transmitted a subspace message to Borg space before being destroyed by the Enterprise NX-01. In 2293 the Federation offered aid to El-Aurian refugees fleeing the Borg. However, each of these incidents contributed almost nothing to the Alpha Quadrant's awareness or understanding of the Borg Collective.

By the 2350s rumors of an alien race called "The Borg" had reached the Alpha Quadrant, inspiring exobiologists Magnus Hanse and Erin Hansen to set out in search of them. Their research took them all the way to the Delta Quadrant before their assimilation in 2356. Borg activity in the Alpha Quadrant went undetected until a series of unexplained attacks along the Romulan Neutral Zone in 2364. The Collective's true nature was finally revealed to the Federation in 2365 when Q took the USS Enterprise NCC-1701-D to meet a Borg cube near the J-25 system.

In 2366 a Borg cube invaded Federation space and assimilated Jean-Luc Picard, whose tactical information contributed, along with the Borg's own vastly superior power, to Star Fleet's disastrously one-sided battle with the cube, called the Battle of Wolf 359. A fleet of 39 starships assembled to combat the cube was completely destroyed, with the cube emerging unscathed. The Enterprise-D recovered Picard and used his connection to the hive-mind to disable the cube before it could attack Earth.

During the 2370s, the Borg were beset by several major setbacks in the Delta Quadrant, all witnessed by the crew of the USS Voyager. The Borg-Species 8472 War decimated the Collective from 2373-2374. Voyager's liberation of Seven of Nine allowed Unimatrix Zero to create an active resistance movement in 2377. In 2378, a crippling blow was delivered to the Borg when Voyager discovered one of their transwarp hubs and destroyed it, killing the Borg Queen in the process (again).

In 2402, the Borg once again invaded the Alpha Quadrant decimating everything in their path. The Federation, already weakened from the ongoing war with the Romulan Star Empire, was ill equipped to resist and the Borg invasion fleet pounded its way through Star Fleet's meager defenses all the way to the Sol System. Mars was entirely assimilated and Earth would have been next if not for a combined force of Klingon, Romulan, Mirak, Tholian, and Federation arriving and defeating the Borg invasion fleet. For a third and final time the Borg Queen was killed and the Borg threat to the Federation was believed to be removed once and for all.

In late 2419, a Borg presence was found on what was believed to be a rogue planet by the crew of the USS Artemis. The rogue planet was actually a gargantuan vessel dubbed the "Megasphere" which contained potentially millions of Drones and construction facilities for Borg vessels. At the conclusion of the Attack on the Borg Megasphere, it became known that these Borg were not truly of the Collective, but of the Borg Contingency, a distinct and secret part of the Collective designed to activate in the event the Collective was destroyed and seek revenge on the Collective's destroyers before returning to Borg space and starting afresh.

Recently, the Pathfinder Project has discovered the wreckage of a Borg station near New Talax inside a nebula. There, they were able to uncover new information about the Collective and it's activities since 2402.

After the Borg Queen was killed in the Sol System, per protocol a new one was activated in the Delta Quadrant and Borg-controlled territory. However, due to the nature of the attack being partially psychic, the Collective was momentarily disrupted and two Queens were activated instead of one. Each believing they were the true and rightful Queen, they attempted to rectify the situation the only way the Borg knew how: forcefully and without mercy. Each took control of the portion of the Collective nearest them, and a civil war began.

Due to the standard Borg methods - attack, recover, attack, in a never ending, unyielding cycle - the war was one of attrition, and one that neither side could end quickly. The confusion also left numerous drones and ships cut off from the hive mind, as well, and entire worlds were stripped bare to feed the insatiable War of Queens. The civilizations on the edge of Borg space were left confused and relieved that they were no longer being threatened, but the war dragged on for years, and into decades.

Until, as 2419 turned to 2420, a new player entered the picture. The Borg Contingency returned to the Delta Quadrant to reclaim their homeland. Being more militaristic and offense-minded than the original Collective, however, it remains to be seen how the old Queens will deal with the new usurper. 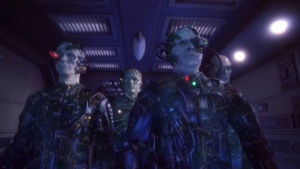 The Borg Collective is made up of at least trillions of humanoids referred to as drones. Through the use of their cybernetic implants, the Borg interacted by sharing one another's thoughts in a hive mind. Upon assimilation, these trillions of "voices" would overwhelm the drone, stifling individual thought and resistance to the Collective's will. To some drones these voices could eventually become a source of comfort, and their absence a source of pain.

Borg philosophy was governed by a primary directive to add the biological and technological distinctiveness of other species to that of the Borg. In this manner the Collective sought to achieve its definition of perfection; all other pursuits were deemed irrelevant. Accordingly, Borg drones did not engage in any activities except their duties and regeneration.

It is unclear whether these principles were simply the consensus of the majority of Borg drones, or if they were "hard-wired" into the technology that links the hive-mind together.

Having no regard for individuality, Borg drones were identified with designations rather than names. A drone's designation typically described its position within a group, e.g. "Third of Five." To more specifically identify a drone, its function could be appended to this designation, e.g. "Seven of Nine, Tertiary Adjunct of Unimatrix 01." In the same manner, the Borg refer to alien species by their Borg species designations rather than by name.

If a drone was sufficiently injured or otherwise in distress, other drones would offer assistance. However, if a drone was deemed irreparable by the hive-mind, the Borg would deactivate it and redistribute any salvageable components throughout the Collective. 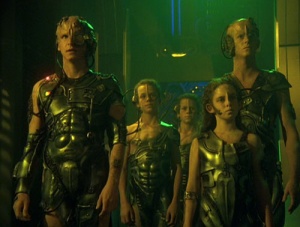 The Borg did not procreate; they added to the Collective's population only by assimilation. Assimilated infants and juveniles would be placed in maturation chambers until adulthood.

The Borg typically operated in an atmosphere with a constant temperature of 39.1 Celsius (102.38 Fahrenheit), 92% relative humidity, an atmospheric pressure of approximately 102 kilopascals, and trace amounts of tetryon particles. These conditions were presumably conducive to the operation of their cybernetics.

Borg drones ignored alien species until they demonstrated the potential to be a threat or a suitable candidate for assimilation. When addressing a small number of individuals, drones would simply attempt to assimilate them without comment. Before assimilating a larger population, such as a starship or an entire culture, the Borg would collectively transmit a standard announcement of their purpose and the futility of resistance. Species the Borg found unremarkable would be deemed unworthy of assimilation. As of 2374 the Borg considered the Kazon beneath their notice, and by 2376 they only took interest in the Brunali if they detected sufficiently relevant technology. 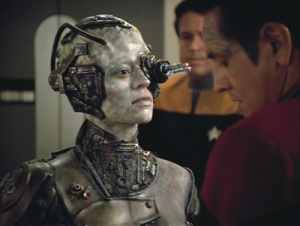 Seven of Nine speaks for the Collective

On the rare occasions that the Borg were willing to open a dialogue with individuals, they chose a single drone to speak for the Collective. Jean-Luc Picard was assimilated and given the name Locutus in the misguided assumption that such a representative would lower the Federation's resistance to assimilation. When Kathryn Janeway successfully negotiated a truce with the Borg and refused to discuss the terms via a neural transceiver, the Collective agreed to communicate via Seven of Nine.

The Borg Queen also spoke for the Collective, acting not as a mere liaison but as a physical manifestation of the hive mind. The exact nature of her role is unclear.

The Borg possessed a near-reverence for the Omega molecule, which they considered to be an expression of perfection. The Collective's fascination with assimilating this molecule has been compared to a religion.