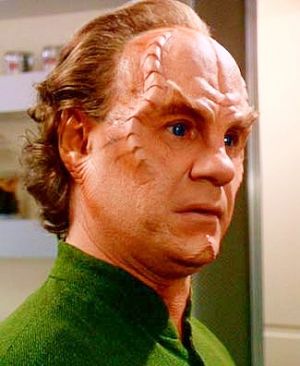 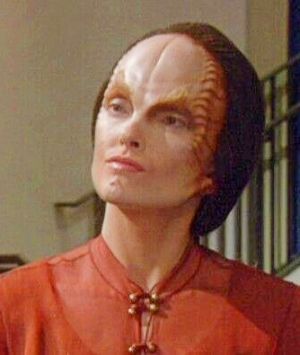 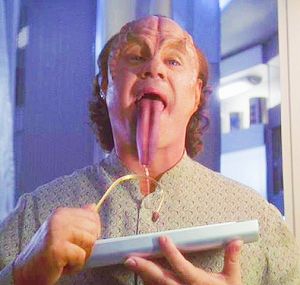 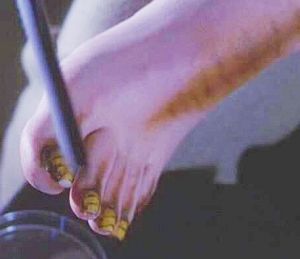 The Denobulans are a humanoid species from the planet Denobula.

Denobulans have prominent facial ridges running down either side of the forehead to the cheeks, an enlarged brow ridge under a high receding hairline, a vertical crevice in the center of the forehead and a ridged chin. They also have ridges on their back, along the spine. Their toenails are dark brown and yellow striped, and they grow so rapidly that they must be groomed once a week. Denobulans also have very long tongues, and they use tongue scrapers. Denobulan males have a line of hair down the middle of their chest, up to their throat.

Denobulans females have very potent pheromones that the males can sense, that they release when they are romantically interested in someone, and presumably during their mating season. Denobulan males have been known to become violent during the mating season.

Denobulans have a unique ability to enlarge their faces. This is an instinct for when they feel threatened. It is likely similar to the defense mechanism of the blowfish, an aquatic lifeform native to Earth. They also have an unusually wide smile for humanoids.

Denobulans seem to change their eye color depending on their moods.

Denobulans normally require very little sleep, but they do hibernate for five to six days each year. However at a minimum two is sufficient. If a Denobulan is awakened prematurely, the results can be somewhat unpredictable - hibernating Denobulans, if woken, appear extremely disoriented and confused, with oddly-pitched voices, and have difficulty maintaining normal motor skills and cognitive functions.

Denobulans have highly-efficient natural climbing abilities similar to those of Earth lizards, being capable of scaling vertical rock faces at a rapid speed with no equipment whatsoever, instead appearing to scuttle up the rock face without needing to find handholds.

They appear to possess particularly powerful immune systems; when a Denobulan was nearly assimilated by the Borg, his immune system was able to fight off the nanoprobes long enough for him to find a means of killing them, although he admitted that his immune system would not be able to hold them off indefinitely.

The average life expectancy of Denobulans is not explicitly stated, but indications suggest that lifespans are extremely long. Phlox once stated that his grandmother lived through Denobula's last war with the Antarans; this war ended while Earth was in the 17th century and Phlox mentioned it during the 22nd century, revealing that only three generations of Denobulans had existed in the space of over five hundred years and suggesting a very long lifespan.

Denobulans are typically polygamous, with a man typically having three wives, who each have three husbands. This creates extremely large extended families; Doctor Phlox had 720 familial relationships, 42 with romantic possibilities. In addition, Denobulan marriages are not exclusive, and married Denobulans can be intimate with anyone they choose. The females emit powerful pheromones during their mating season. Male Denobulans often become combative during this time, and mating can require medical supervision. Denobulans typically prefer to be amongst large groups and find solitude uncomfortable. However, Denobulans, at least males, are uncomfortable being touched by persons they are not intimate with.

Amongst Denobulans, it is considered healthy for a person to hallucinate, as it is seen as a harmless way to release nervous energy.

The Denobulan lullaby is a form of song. In 2154, Phlox offered to sing the lullaby to Porthos although the doctor remembered that his singing would often make his Denobulan children cry.

On their homeworld Denobula, the 12 billion Denobulan inhabitants all share one continent, with the result that living-space is at a premium and Denobulan culture has come to embrace close, communal lifestyles. It is unspecified whether this habitation arrangement is due to necessity or choice on the part of the Denobulans.

Denobulans do not talk during meals, as they consider it a waste of time.

The Denobulans believed they were the only intelligent species in the galaxy until the B'Saari made first contact.

Denobulans have fought several wars against the Antaran race. The last one was during the late 17th century. Denobulan battle tactics killed 20 million Antarans. The Denobulans demonized the Antarans and made them a faceless enemy. As of the 22nd century, there were still some Denobulans that hated Antarans, although most have outgrown the hatred.

In 2155, a Denobulan ambassador was sent to Earth to join in talks of forming a Coalition of Planets.