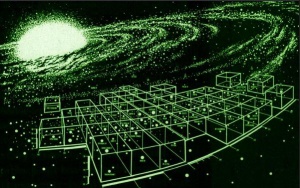 The Milky Way Galaxy is a large barred spiral galaxy that is approximately 100,000 light years in diameter, and contains over 400 billion stars. The galaxy is composed of three major parts: the core, which contains a supermassive black hole called Sagittarius A, the disc, which is the ring of stars and interstellar dust that gives the galaxy its spiral shape, and the halo, which includes many older stars orbiting the core, but outside the disc, of which most are concentrated in massive globular clusters.

The Milky Way's disc is surrounded by a massive barrier of unknown origin, which prevents most travel into and out of the galaxy.

The core is also surrounded by a similar force field called the Great Barrier, which is very difficult to penetrate.

In the science of stellar cartography, the Milky Way is divided into four major areas called quadrants: Alpha, Beta, Gamma and Delta, each of which compose one-quarter of the galaxy.

A map of the Milky Way Galaxy was on display in Astrometrics aboard the USS Voyager from 2377 through 2378.

Only one out of every 43,000 planets in the galaxy supports intelligent lifeforms.

According to Dr. Leonard McCoy, there is a mathematical probability of three million Class M planets in the galaxy.

Many species have tried to destroy the inhabitants of the Milky Way Galaxy including extragalactic parasites, Species 8472 and the Sphere Builders.

An expedition sent by the Kelvan Empire, from the radiation-imperiled Andromeda Galaxy, scouted the Milky Way for possible invasion in 2268.

Sargon's people may have been extragalactic, since he stated that his people colonized the Milky Way Galaxy some six million years ago.