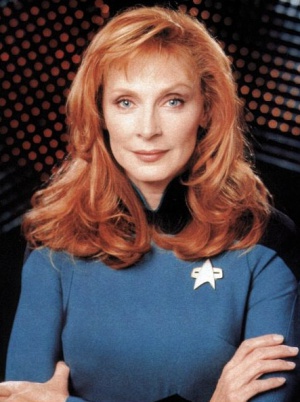 Doctor Beverly Crusher, the CMO of the USS Enterprise-D.

The chief medical officer is a senior staff-level position who must hold the rank of Lieutenant Junior Grade or higher, and who is a Medical Doctor.

Chief medical officers were also referred to as the "ship's surgeon" in the 23rd century.

CMOs aboard a starship or starbase are directly in charge of the Sickbay or Infirmary, commanding medical department personnel and activities. The CMOs' primary duties are the oversight and maintenance of the overall health and physical fitness of crew and passengers. They are also responsible for managing medical department personnel, including things like department schedules, training, and promotions. They are also responsible for overseeing the Counseling department and the Medical Research department.

Officers likely to be assigned as the CMO over long-duration missions of exploration have scientific training in disciplines outside of medicine, allowing them to take on major extended research projects, or to better participate in a wider variety of encounters.

In addition to the normal duties of an officer, the CMO also has the power to relieve an officer or crewman, including a superior one, of their duties if, in the Chief Medical Officer's professional judgment, he or she is medically unfit. Typically, the CMO is expected to have the support of a senior command officer or detailed medical documentation to justify this course of action.