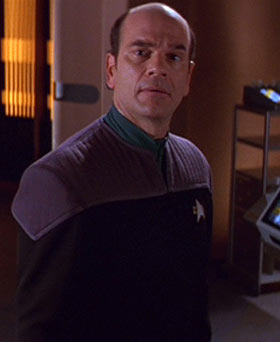 Note: This is NOT a PC and NPC rated species.

The Emergency Medical Holographic program (EMH) is a sophisticated hologram developed in the early 2370s by Star Fleet. It has been used on most Federation starships since the late 24th century. It was designed to provide short-term advanced medical assistance during emergencies in sickbay to the extent of literally replacing a starship's medical officer. The first starship to be equipped with an EMH was the USS Voyager. The Equinox, which was commissioned sometime the previous year, also had an EMH program. The formal name of the program is EMH Program AK-1 Diagnostic and Surgical Subroutine Omega-323.

The EMH program was first activated on stardate 48315. It was developed by Dr. Lewis Zimmerman at the Jupiter Station Holoprogramming Center as the embodiment of modern medicine. The EMH was programmed with 5 million possible treatments from the collective information of 2000 medical references and the experience of 47 individual medical officers. The EMH was also supplemented with contingency programs and adaptive programs to learn while serving as a supplement of a normal medical staff in cases of emergency.

Some biological Star Fleet doctors objected to the use of the EMH. Doctor Beverly Crusher swore that she would never use one, although she was forced to do so in order to create a distraction while the Borg tried to assimilate the USS Enterprise NCC-1701-E) allowing her, her medical staff, and her patients, notably Lily Sloane, to escape from sickbay.

As of 2376, there have been four versions of the EMH, called Mark I, II, III and IV. The Mark I's outward appearance was a copy of its inventor, Dr. Zimmerman. However, as the Mark II was released to overcome the defects of the Mark I, the first version soon became obsolete and, thus, was reconfigured for menial tasks such as to scrape plasma conduits or to mine dilithium ore. At least 678 Mark I's were created; 675 reconfigured for menial tasks, one aboard Voyager, one aboard the Equinox, and the backup copy of Voyager's EMH which is in possession of the Kyrians; assuming these were not counted among those reconfigured.

Furthermore, the patterns of behavior of the following versions were designed to be more pleasant and courteous and their outward appearance was changed. In addition to that, new ship designs like the USS Prometheus enabled full mobility for the EMH, as the whole ship was outfitted with holographic projectors.

After the EMH Mark II supplanted the "inferior" Mark I, the only remaining versions to fulfill their original programming were aboard the USS Voyager and the USS Equinox, which were both stranded in the Delta Quadrant and had to implement the emergency holograms for extended periods of time. In 2376, the Equinox EMH was deleted while in Voyager's database, leaving Voyagers program, "The Doctor", as the only Mark I still operating as an EMH.

The USS Apparition, an Apparition-class Infiltrator, is the smallest ship in Star Fleet to have the ability to project an EMH, due to its specialized holographic technology. However the maintenance on the OHD on this vessel is extremely costly, making the overall cost of the vessel equal to that of a Battle Cruiser.

The Doctor, a Mark I, originally objected to being the replacement for the entire medical staff of USS Voyager, as the EMH program was only meant to function for a maximum of 1,500 hours (62.5 days); after this time, memory degradation would occur. Fortunately, with the help of his colleagues, his program was altered to overcome this shortcoming. Star Fleet would later request a holoprogram designed to operate as a full-time doctor in any posting where life support or living space was at a premium and the primary mission did not require the doctor to leave sickbay. As a result, the research and design for the Long-Term Medical Holographic program was begun in mid-2373.

Note: On Federation Space we do not employ Long-Term Medical Holographic programs.

Voyagers EMH developed a distinct personality over the ship's seven year-long journey to the Alpha Quadrant, possibly due to the numerous alterations to his programming. It was granted all privileges and rights of a living person because of this. Furthermore, Voyager's EMH was able to leave sickbay or the holodeck and to roam freely with the help of a mobile emitter (originating from 29th century technology). The Voyager's EMH was even given the responsibility of commanding the ship as the Emergency Command Hologram (ECH) if the ship's commanding officers were not present, incapacitated, or even dead.

When the Doctor was sent in a holographic data stream to contact the USS Prometheus, he found the starship in the hands of Romulans, who had killed the Star Fleet crew and captured the ship. The Doctor activated the ship's EMH, a Mark II, to help him recapture the ship. The Mark II initially preferred to just deactivate and wait for rescue, and then treated the Doctor as inferior despite the other's vastly superior experience of life in general. The Doctor's experience, after all, clearly showed not doing anything and waiting for rescue on a ship with vastly superior firepower to anything Star Fleet had at the time would be a stupid decision. This is ironic as the EMH Mark II was supposedly 'superior' to the Doctor.

The Doctor ultimately persuaded the Mark II to take action and help him. They planned to disable the Romulans by venting an anesthetic gas, but The Doctor was captured by the Romulans when he attempted to reach the environmental controls on the bridge. During the Doctor's interrogation, the Mark II simulated a bio-hazard, opening the vents which released the gas, knocking out the Romulans. The Doctor and the Mark II successfully fought off Romulan warbirds using the ship's experimental weapons systems, and returned the ship into Star Fleet's hands, and informing them that Voyager was in the Delta Quadrant.

This information taken from http://www.memory-alpha.org/