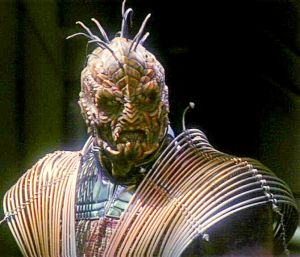 The Xindi-Reptilians are a humanoid race and are the most aggressive of all the Xindi species. They have yellow to brown-colored scales with multiple spikes coming out of their heads. They have yellow eyes with slitted vertical pupils, and are cold blooded. Like other Xindi, they have characteristic ridges on their cheek bones.

Reptilians are perceived as being untrustworthy and impatient by the other Xindi species. A common Reptilian saying is "Patience is for the dead." It is said that "Dealing with Reptilians is like bargaining with the sun. You make no progress, and you come away burned." Nevertheless, the Reptilians are the first choice for when force was needed.

With their easily provoked and opinionated nature, Xindi-Insectoids often side with the Reptilians on certain issues. They sometimes even share ships with each other.

Reptilian weapons use eel-like power cells. The biorifles work on a rotating modulation that self-destructs if accessed by other species.

The Reptilians are the species of Xindi that seemed to be most interested in destroying the planet Earth. The Reptilians live out a militaristic lifestyle and hope to ultimately rule over all the other species of Xindi. Reptilian soldiers are surgically implanted with a "suicide gland" that unleashes a neurotoxin when they are captured. The Reptilians also use thermal chambers on board their ships due to their cold-blooded metabolisms.

Reptilians prefer to be on or near the ground as opposed to up in the air.