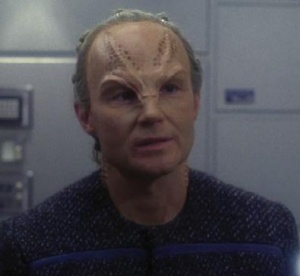 Note: This is PC and NPC rated species.

The Antarans are an Alpha species, strongly humanoid with a lifespan of at least 60 years upon reaching adulthood. The Antarans are noted for the V-shaped ridge on their foreheads

Antarans have been at war with the Denobulans several times, the last conflict of which took place in the 19th century. However Antarans continued to strongly dislike Denobulans until at least the 2150s, even though encounters between the two species were extremely rare. This behavior is due to widespread prejudices, as every Antaran is taught from childhood that all Denobulans are enemies, to be feared and reviled.

There's probably good reason to suspect that the Antarans come from the Antares system. If this is the case they are most likely a Federation member, since the Federation-operated Beta Antares Ship Yards are located in this system.

In the 24th century, Ensign Loolooa Tereshini was an Antaran serving in Starfleet. (TTN novel: Sword of Damocles)