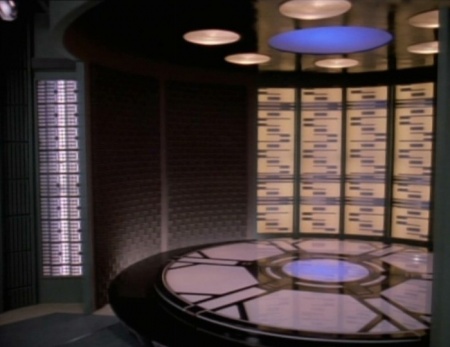 Instead of using shuttles and other small craft to travel to and from their ships, Star Fleet personnel can take advantage of one of the most miraculous of the Federation’s technological achievements: the transporter. Transporters dematerialize a subject or object, transforming it from matter into energy, use a narrow-focus subspace carrier wave to transport the energy to a designated location, then transform the energy back into the matter that was dematerialized. Thus, a person can transport carrying his equipment without worrying about having a phaser’s atoms mixed in with his, or his hair coming out blond instead of black, or his tricorder failing to work.

Whenever any person or object is transported, the carrier wave includes a transporter ID trace: a computer record of the entire transport process. In the event of an accident, personnel can review the trace to try to find out what happened and, if possible, correct the situation.

The transport process takes about five seconds when using Federation equipment; other species’ transporters may work a little slower or faster. Problems such as interference or equipment malfunction may slow the process considerably, or pose a risk to the subject. Operating a transporter is often a delicate and complex task, and even the lightest interference can render transport dangerous. Problems can easily result in “losing” a person’s pattern forever or an improper materialization (almost always fatal), or sometimes in even more bizarre fates: individuals duplicated or divided into two separate beings, two persons melded into one, or temporal or dimensional rifts (which cause the subject to end up in a different time or dimension than he transported from), just to name a few horrific examples. Fortunately, such accidents are extraordinarily rare. Multiple redundancies and safety procedures ensure that the vast majority of transports are absolutely safe, routine, and uneventful.

A transporter will not work through a shield or through a cloak. However, there are sometimes ways to avoid these restrictions.

There are three types of transporters:

A ship can try to cut through interference by improving the performance of a transporter. The most common way to do this is to supply the transporter with extra power, thus tightening the ACB, enhancing the emitter and receiver arrays, reconfiguring the pattern buffer and so forth.

Isolinear tags are small transponders which function just like pattern enhancers. However, they only work for one person.

To counteract dampening fields and similar forms of interference, a transporter operator can match the transporter’s pattern buffer’s frequency to that of the field.

A transporter operator who is having difficulty establishing a lock on a subject due to interference can try to establish a skeletal lock by homing in on the minerals in the subject’s bones. Similarly, if a ship suspects it will have trouble beaming someone back to the ship, it can have him injected with radioneuclides, then use those to help lock onto him. The effects are the same as for a skeletal lock.

The weight of a transported object generally has no impact on the transport process. There are recorded instances of multiple hundreds of tons of living and unliving matter being transported without difficulty. The limiting factor on transport (besides range) is the size of the emitter pad(s) used (if applicable), and the size of the area into which the subject will transported.