"Phaser" is an acronym for PHASed Energy Rectification. All phasers fire particle beams. Personal phasers can stun or kill an enemy. The stun setting can also be used for crowd control. Ship-mounted phasers can damage shields or other systems or even cut a vessel's hull.

Phasers are based on the rapid nadion effect, whereby energy is passed through a special phaser crystal resulting in a discharge of short-lived nadion particles (often the detection of nadion discharges is a key sign that a battle has recently taken place).

Nadion particles have varying effects on the subatomic bonds of particles with which they interact, largely depending on the mass of the atom in question. To wit, dense starship hulls are more resistant to nadion discharges than are humanoid lifeforms.

The disruptive effects of nadion discharges can be moderated to produce varying effects (discussed below), ranging from benign to extremely destructive. Phasers, as particle beams, travel below the speed of light, seemingly varying according to the scale of their emitter.

Phasers can be made to overload, either deliberately or by sabotage. One possible method to overload a phaser involves disengaging the safeties that normally manages the phaser's power system. This allows energy to be transferred from the power cell to the prefire chamber then back into the power cell faster than the cell can reabsorb the energy, causing the cell to overload. Phasers in the process of overloading emit a distinctive high-pitched whine. About sixty seconds after the overload started, the weapon would expend all of its remaining energy in an explosion capable of doing considerable damage to its surroundings

25th Century Phasers have been designed to be ergonomic and powerful. When concentrated beams of energy proved insufficient against groups of opponents during the Federation's many conflicts in the late 24th century, modern Phaser designs have been adapted to work on the concept of pulse-fire; delivering the full charge of a phaser blast in one pulse, allowing for rapid fire at the expense of power drain and wear on the emitters. Star Fleet Security has decided this is an acceptable trade; emitters can be replaced easily, trained Security Officers cannot. 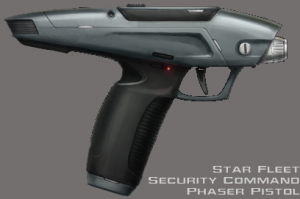 The Phaser Pistol is a departure from the design which had been in favour for almost 100 years. Returning to the pistol design in vogue in the 23rd Century, the Phaser Pistol is the standard armament used by Security Officers and members of Away Teams, and kept in various compartments throughout ships.

All results based on average 100kg Humanoid Life form. The Phaser Pistol's energy cell has a capacity of 50 charges.


WARNING: ALL STUN SETTINGS ABOVE MEDIUM CAN BE LETHAL AT POINT BLANK RANGE.

Channelling power through the large rifle housing creates the most powerful phaser based field weapon Star Fleet designs and that can still be carried by any shipboard officer. The removable power pack allow for almost continuous use without recharge at any power setting, as long as extra power cells are available. The Phaser Rifle has the same six settings as the Phaser Pistol, but utilizing two cells at once allows for greater ammunition capacity. The default targeting system for the Phaser Rifle incorporates a red dot sight and tactical light; this can be replaced with a telescopic sight in situations where longer-ranged engagements are expected.

All results based on average 100kg Humanoid Life form. The Phaser Rifle's power cell has a capacity of 100 charges.


WARNING: ALL STUN SETTINGS ABOVE MEDIUM CAN BE LETHAL AT POINT BLANK RANGE.