Sethis was raised an orphan by the Royal Elasian Guard to become a member of Serpent’s Fang, a special detachment answering only to the Dohlman. They served as the Dohlman’s personal guard and when necessary her fist. During his time in the Fangs, Sethis was called on to do terrible deeds all for the betterment of the Elasian people.

As the years past he found himself questioning the true motivations behind the missions he was ordered to carry out. It was during this time he met Saleen, the daughter of a nobleman who opposed the current Dohlman’s reign. As time passed the two became very close and when Saleen announced to her father her attentions to marry Sethis he forbid her from seeing him again. Soon after the Dohlman announced that Saleen’s father was to be placed under arrest for suspicion of treason. The following trial was filled with circumstantial evidence and heresay led by none other then the Dohlman herself. When the not guilty verdict was rendered the Dohlman became outraged and secretly ordered her Fangs to kill the nobleman and his family.

That night Sethis and three of his fellow fangs slipped into the nobleman’s estate. That night Sethis broke his vow to the Dohlman and was forced to kill his fellow Fangs to protect Saleen and her family. For his actions he was branded a traitor and sentenced to death. Before the sentence could be carried out he escaped with Saleen with the aid of her father. Together they fled from their homeworld and made their way to Earth where they eventually married.

With Saleen’s help, Sethis has tried to come to terms with his dark past and when he decided to apply to Star Fleet in an attempt to make up for his past deeds, his wife was very supportive. Wary of people he doesn’t know, his first few months in the Academy were difficult. He eventually adapted to his environment and made several friends, including Jack O’Keefe a spirited Irishman.

Academy Major(s): Security, squad tactics
Academy Minor(s): Hand to hand
Hobbies and Pastimes: Martial Arts
Short-Term Goals: To perform well in his duties
Long-Term Goals: To serve with honor and redeem himself for his past deeds
Personality: Initially cautious of new comers, he takes a long time to get to know
Sense of Humor: Dry
Phobias: None
Likes: Martial Arts
Dislikes: Incompetence, treachery, ignorance, people not willing to face their mistakes
Pet Peeves or Gripes: None
Bad Habits or Vices: Alcohol
Achievements: Marrying Saleen, joining Star Fleet
Disappointments: Too many to list
Illnesses: Nothing serious
Strengths: The ability to instill fear in others, ability to fade into the background
Weaknesses: Making friends
Fears: Losing his wife and never being able to return home
Prejudices: The Dohlman of Elas
Off Duty Clothing Tastes: Light cotton shirt, loose fitting pants 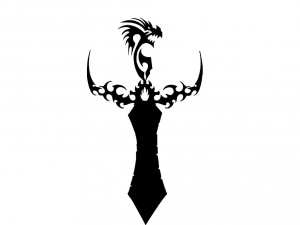 Distinguishing Features: A stylized dagger adorned with a serpent’s head as the hilt with the words “Death before Dishonor” in Elasian written along the blade’s edge, on his right forearm. Various scars the most prominent a long gash across his back, running from his right shoulder blade down to his left hip.
Pets: None
Friends: Jack O’Keefe