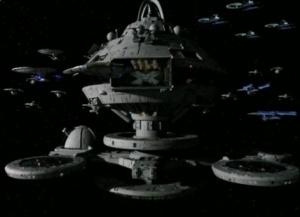 Starships arriving at Star Base 375 for Operation Return

Star Base 375 was a Star Fleet space station in operation since the mid-24th century.

Following the Second Battle of Deep Space 9 and the subsequent withdrawal of Federation and Klingon forces from Deep Space 9 in late 2373, the USS Defiant under the command of Captain Benjamin Sisko was recalled to Star Base 375 for reassignment. Captain Sisko was stationed here as adjutant to Admiral William Ross after being relieved of command of the USS Defiant by Ross. This starbase was also the location of a Jem'Hadar attack ship retrieved by Sisko a year prior from Torga IV.

Approximately four months later, Starbase 375 served as gathering point for the Second and Fifth Fleets in preparation for Operation Return, in which combined Federation and Klingon forces managed to retake Deep Space 9. Sisko then returned to his previous post as commander of Deep Space 9.