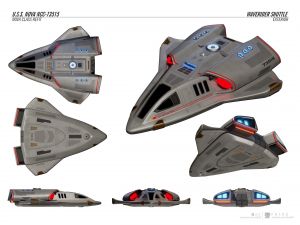 The WaveRider Mark II was designed to enhance the scientific and defensive capabilities of the Rhode Island Class and Luna Class starships. This auxiliary craft has been upgraded to overcome the technological and operational deficiencies of the original Waverider design by incorporating improvements brought about by rapid starship design advancements made during the last four decades. Its purpose is to augment and enhance the scientific capabilities of the starship as well as provide for escort, scout, and prolonged mission outpost duties.

The WaveRider Mk II is divided into multiple re-configurable compartments designed to support scientific, defensive, and logistical operations for up to several weeks away without support from the parent vessel.

The Waverider is controlled from the forward cockpit. Helm and Navigation stations are at the front with four configurable stations to the rear. An enormous forward window provides a stunning view of the Waverider’s surroundings. In an emergency, control of the Waverider can be taken by configurable engineering consoles in the Aft Mission Operations Bay.

The Waverider is designed for prolonged scouting or survey missions without direct support from another starship. As such, she is designed to accommodate a standard crew size of 8 in relative comfort for up to thirty days. A large compartment aft of the cockpit serves as a lounge, conference area, and dining facility. A replicator provides any food which has been programmed into the Nova’s database. Three windows flank both sides of the compartment to provide natural lighting while the WaveRider is landed or near stellar phenomena. Holographic displays integrated into the large circular table allow for briefing displays and provide entertainment during prolonged missions. There are two sleeping aft compartments aft of the lounge which contain two dual bunk beds and a connected lavatory and sonic shower. These compartments can be reconfigured to support single or double bunk VIP accommodations.

The life support system can sustain up to 45 personnel in an emergency situation.

The Aft Compartment serves as a large cargo hold, science lab, and medical facility. A high-resolution cargo transporter is capable of transporting delicate scientific specimens as well as bulk cargo supplies. This cargo hold is large enough to store a disassembled Spider-class Recon Buggy. Specialized laboratory equipment is contained on the starboard side of the compartment, along with a retractable biobed and enhanced overhead medical scanner. Holo-emitters are installed to allow for the use of an EMH and holographic analysis tools to support scientific studies.