The USS Ross is a starship designed as part of the Fleet Modernization Program as an alternative to the Andromeda Class Exploration Cruiser. It is currently in service as a testbed for new and experimental Science and Engineering systems. The USS Ross is named for Mary G. Ross, the first known Native American female engineer.

The Galaxy III project was actually one of the proposed designed for the initial Galaxy-Class refit, the Galaxy II during the mid-2370s. Rejected at the time, Dr. Jeremiah's Quick's three-nacelled variant became the operating model during the wars of the late 24th century. However, after in the nearly three years since the Galaxy herself was refitted to those specifications, it has become clear that the Quick design was not without it's flaws.

Work continued on the proposed design even while the Galaxy II was still in refits. This work never bore fruit, however, as Star Fleet eventually turned its focus towards warships with science facilities rather than science vessels with warfighting capabilities. The design languished in a desk drawer somewhere at the Star Fleet Corps of Engineers until mid-2418, when the failure of the Beckett-class required an immediate replacement for deep-space exploration within the Alpha and Beta Quadrants.

Pulled from Qualor II at the same time as the USS Andromeda, the Ross was based on a competing design by the Tellarite engineer Doctor Debluch Marrone. A more extensive retrofit than the Andromeda, the hull structure was significantly altered to allow for anticipated breakthroughs in scientific and engineering systems. The rebuild was beset by delays, and the Andromeda was the first ship out of the construction yards; being awarded the contact for full production. Rather than scrap the nearly-complete Ross, Star Fleet instead decided to finish her and utilise her as a testbed for the newest and most experimental systems. Finally completed six months behind schedule, the Ross launched in mid-2421. 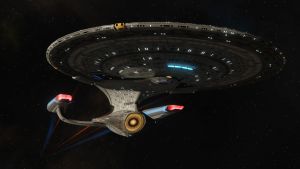