The second planet in the Eisn system, Romulus, called ch'Rihan in the Romulan language, was the homeworld of the Romulan species and the the principal planet of the Romulan Star Empire until its devastation by the shockwave of powerful supernove in 2411. Its capital city was Ra'tleihfi.

Romulus was a temperate Class M planet known for its great natural beauty and numerous lakes and oceans. All life on the planet, both plant and animal, was extinguished by the shockwave however. It is now a lifeless, barren, radioactive world. It has one moon, Fvuras.

Romulus and Remus are often referred to as twin planets, though in reality both worlds orbit Eisn independently.

Romulus was settled more than two thousand years ago by an offshoot of the Vulcan race who left their home planet in search of a world where they could continue to embrace older traditions at a time when the Vulcans were turning to logic and rejecting the past. Led by S'Task, the father of the Romulans, 80,000 men, women and children boarded pre-warp vessels and began what now is called "The Journey" (Hwael in the Romulan language). 18,000 survived the one hundred year odyssey that eventually led them to the twin worlds of Romulus and Remus.

Famine and disease took their toll on the early settlers, and an ineffective system of government collapsed fifty years after settlement, allowing for the first and only queen of the Romulans, Vriha t'Rehu, to seize power. Though Rehu brought much needed organization and industrialization to the planet, she ruled with an iron fist and without honor. Civil war broke out, with opposition to Rehu led by S'Task. While Rehu was ultimately deposed, S'Task was also killed. By that time, war, combined with the natural disasters of the past, had left the Romulan people numbering only 9,000.

In the wake of Rehu's rule, the new government vowed that no one person would ever control the Romulan people again. The Tricameron, including the Praetorate and the Senate, was established to serve as a balance of power to each other. Strict social rules were also enforced, and a loose caste system developed. This form of government and social system has remained intact since that time and has provided the Romulan people with the stability needed to expand into Empire and become one of the major powers of the Alpha and Beta Quadrants.

Romulus remained the center of the Romulan Star Empire until 2411, when it was devastated by the shockwave of a powerful supernova. Before the shockwave hit, the population was evacuated to various colony worlds in an operation labeled as the Exodus. Samples of most animal and plant life on the planet were also saved, being housed on Hdrael 2, a converted starbase, for future re-introduction once the planet has been cleared for habitation again. Efforts to de-radiate the planet began soon after the shockwave passed, though it is expected to take at least a century before Romulus is full habitable again.

The Romulan seat of government was moved the planet Eilhaunn during the Exodus. 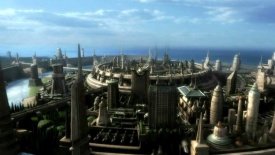