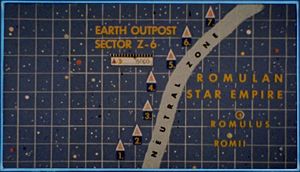 A partial map of the Romulan Neutral Zone in 2266 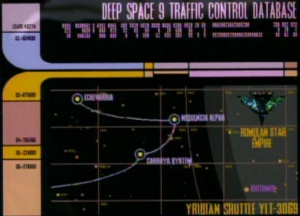 Map showing another region in 2369

The Romulan Neutral Zone was an area of demilitarized space within the Romulan Star Empire along its border with the United Federation of Planets. It was established after the end of the Earth-Romulan War and dissolved at the end of the Fourth Romulan Civil War in 2415.

The Zone could be colonized and industrialized by the Empire, but no military facilities were allowed to be built within it. Romulan military vessels could patrol the Zone in the name of security but not deploy troops there. Entry by Federation starships into the Zone constituted an act of war, and those vessels could be impounded by the Imperial Fleet. There were, however, several breaches, most in the late 24th century.

Over the years, the Zone became an important point of unofficial trade between the governments. Civilian vessels from each side were free to visit the several inhabited planets in the territory, such as Nevas IV. As such, it also became a hot spot for espionage, with agents from various governments interacting with each other away from the prying eyes of the military.

The Zone was patrolled by a civilian security force, which in truth consisted of Imperial Land Army personnel who temporarily received a discharge from service to join the force for two years and were then re-inducted into the Land Army when those two years were up. The security force answered to the civilian governors of the various planets within the Zone.

After the Earth/Romulan War, at least eight Earth Outpost Stations were built on asteroids along the Zone. In 2266, four of these outposts were destroyed by a Romulan Bird-of-Prey. Commander Hansen was in command of Earth Outpost 4 until its destruction.

In 2311, the Neutral Zone was reinforced and redefined in the Treaty of Algeron. Deanna Troi recalled this fact when she discussed the USS Pegasus with Commander Riker.

In 2365, the Enterprise-D was ordered to investigate the Neutral Zone to solve a mystery concerning the disappearance of a string of Federation outposts. It is later presumed that the outposts were decimated by the Borg due to a signature obliterative technique unique to their kind. A crew member aboard the ship, Worf, describes it: "The outpost was just not destroyed, it's as though some great force just scooped it off the face of the planet". Later that year, the Enterprise-D encountered a Borg cube that presumably obliterated several other populations in uncharted space in the same fashion.


In 2373, the Enterprise-E was ordered to patrol the Neutral Zone during the second Borg assault on Earth, as Star Fleet Command felt that Jean-Luc Picard's experience with the Borg would make him a risk during the battle to defend Earth.

Before the Romulans joined the Federation/Dominion War in late 2374, the bulk of their fleet was deployed along the Neutral Zone.

The USS Cairo disappeared and was presumed destroyed by the Dominion near the Neutral Zone. It was believed that the Dominion ships had crossed from the Romulan side of the Zone to attack the Cairo, something they were allowed to do as per their nonaggression pact with the Romulans.

After the Third Romulan Civil War ended in 2410, the zone began to be used as a safe haven by rebel factions of the losing side. Those factions eventually united as the Uihvueri, led by telepaths, which used the area as a base to bomb nearby Romulan and Federation targets as well as disrupt shipping. In 2413, the Tal'Shiar seized the Neutral Zone and militarized it, ending the Treaty of Algeron and closing the border in the name of security. Forced to act, the government attacked, and the ensuing Fourth Romulan Civil War turned the region into a battlefield as the Tal'Shiar and Uihvueri allied with each other to overthrow the ruling coalition on Eilhaunn. After the Tal'Shiar was defeated and disbanded, the Imperial government kept the zone militarized, ending its neutral status, a move tacitly agreed by the Federation in light of the potential for future trouble to erupt in the region again.