Not to be confused with the Klingon Bird-of-Prey 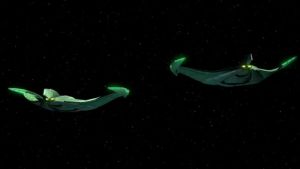 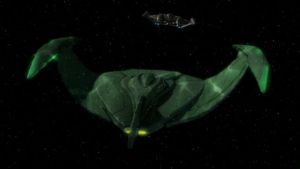 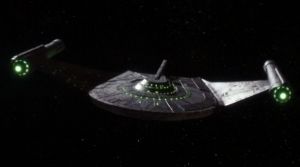 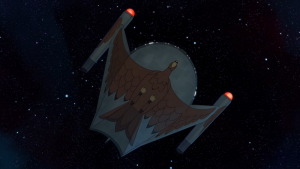 Used by the Romulan Star Empire in the 22nd and 23rd centuries, they are green in color, and were were designed to appear as birds-of-prey. They were equipped with disruptor banks, as well as advanced cloaking technology. The ship was 130 meters long, and composed of a single saucer-shaped hull with a pair of up-swept warp nacelles mounted on either side.

Armed with disruptor cannons and beam arrays, with a teardrop-shaped hull, a pair of green-glowing impulse engine exhausts were mounted at the aft of the saucer. Above them, the stabilizer fin was affixed to the rearmost part of the ship. The hull was segmented and included a shield-generating deflector grid. The twin disruptor emitter was mounted on the bow of the ship, below the two main decks of the saucer. Whereas a section on the bottom of the ship was recessed one deck, the dorsal hull contained a raised section with an additional two decks and the main bridge on top. The pylons swept up- and forward aggressively. Dagger-like pointed nacelles sat at their ends.

The Romulan birds-of-prey were first encountered by Starfleet in 2152, when the Enterprise NX-01 inadvertently encroached upon a Romulan-claimed star system, which was protected by a field of cloaked mines. A vessel of this class decloaked and approached Enterprise. The Romulan commander hailed (on audio only) and ordered the Enterprise crew to leave or be destroyed, though Enterprise's translator failed to lock onto the Romulan language. To prove the Romulans' point, the Bird-of-Prey fired two warning shots at the Starfleet vessel, and Enterprise's commanding officer ordered the activation of quantum beacons, in order to avoid hitting any of the cloaked mines. The Romulan vessel then re-cloaked.

First encountering the new version of this vessel in 2266, a single ship of this type crossed the Romulan Neutral Zone and destroyed several border outposts. The Romulans later used larger numbers to patrol their border with the Federation in force. Typically during an incursion, one Bird-of-Prey would bring a starship out of warp with a plasma torpedo, to allow the ships in its battle group to attack the target as a group.

The Romulan Bird-of-Prey was designed with a sole primary hull configuration with two attached nacelles. The ship’s cloaking device consumed an enormous amount of power. The Bird-of-Prey was able to strike its enemies at will, practically undetected and unchallenged.

Vessels of this class saw action in the Dominion War of the 2370s. Possibly due to their tenacity, Captain Benjamin Sisko suggested that the Romulan forces, including their Birds-of-Prey, be stationed at the front of the Alliance's fleet.