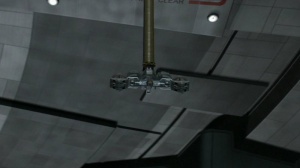 The quantum beacon was a device used by the Enterprise, NX-01 crew to reveal Suliban stealth cruisers.

It was positron based, and had an output of two hundred gigawatts. The sub-assembly tolerances were isolated from the emitter algorithms, which was made possible by generating a stable flux between the positronic conductors and renormalizing the tertiary wave functions.

The quantum engineering required to build it was beyond Star Fleet's level; the necessary knowledge was provided by Crewman Daniels to Captain Jonathan Archer, who acquired the technical know-how to build them within a two-hour span. The beacons were temporarily installed on the grappling arm, replacing the ship's usual clamps.

The beacons also proved useful against cloaked Romulan mines, but not Birds-of-Prey.