The 'Osana-class Science Escort is a Star Fleet starship class, of escort type. 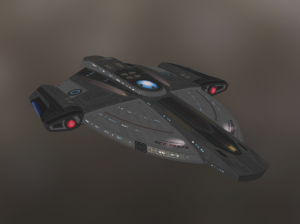 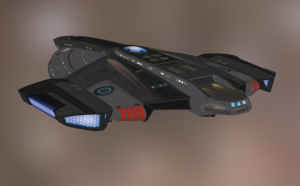 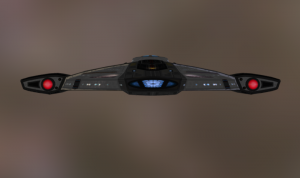 The Osana-Class Science escort was developed at the same time as the Tar'Hana class Cruiser to serve the purpose of a long-range shuttle capable of larger scientific handlings than most escorts, even surpassing the Lanthanum-Class Science Escort. The class is well equipped for most missions but specializes in science profiles. The Osana-Class lacks significant weaponry compared to the Cicero Class Support Escort, but boasts enhanced shielding and manoeuvring abilities. Because of its larger size, most Starbaes do not station very many if any. The vessel has 4 decks, including science and medical labs and other needed services for mid-to-long-range missions. Most commonly, the Osana-Class Science Escort is used as the Tar'Hana Class Cruiser's escort.

The Osana-Class, because of its larger size gloats many amenities that smaller escorts and even some larger ships may not have. The escort still includes only sonic showers, and limited replicator stations and rationing on longer missions, group bunking all except the CO/FO in two barracks.

The Osana-Class is outfitted for medium to long duration sub-aquatic use. It has deployable fins and can use it's thrusters to propel itself under water. Underwater it can achieve a speed of up to 100kph and can sustain double that on the water surface.

This Science Escort was mainly used as a prototype ship, for the Tar'Hana Class Cruiser. After the General War several were constructed but due to their advanced and tempermental systems the ship never went into major production.