The "mirror universe" is the informal name for the "parallel universe" first recorded as visited by James T. Kirk and several officers from the USS Enterprise, NCC-1701 in 2267. This parallel universe coexists with our universe on another dimensional plane. The universe was so named because many people and places seemed to be the exact opposites of their "normal" selves in "our" universe, but with numerous "good" aspects now "evil", and vice versa.

Although the Universe as a whole has, as exhibited by the experiences of Lieutenant Worf, an infinite number of parallels, this specific Mirror Universe appears to be somehow interconnected with the "standard universe" to the point of almost everyone from the standard universe having a counterpart in the mirror universe. This is despite the wildly divergent histories of the two, which would normally render the probability of the same individuals existing and being born on the same dates to the same parents throughout infinitesimally small. 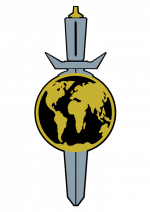 In the mirror universe, known history is dominated by the Terran Empire. It is not clear when the Empire began. Commander Jonathan Archer once stated that the Empire had existed for "centuries" as of 2155. Archer did not mention how many centuries, but by his statement, the Empire can be traced back to at least 1955, suggesting that it was a Terran political unit before it became an interstellar empire.

First Contact between Vulcans and the Terran Empire took place in 2063, as it did in our universe. However, Earth's long history of nations warring with each other, the stronger overcoming the weaker, led the people of Earth to believe that conquest was the only means of surviving in the universe. Peace was only a ruse, and was used to determine an enemy's weaknesses and to enable the one offering peace a chance to conquer from within. So, when the Vulcans landed and made their peaceful introduction, Zefram Cochrane shot the first Vulcan to step onto Terran soil, instead of welcoming them with open arms, and the Terrans, interpreting the landing as prelude to an invasion, raided the Vulcan ship. With advanced Vulcan technology now at their disposal, the Terran Empire expanded and conquered other races, including the Vulcans, Andorians, Tellarites, Orions and Denobulans.

In 2155, the ISS Enterprise was the flagship of the Terran Empire's Star Fleet. Commander Jonathan Archer mutinied, in order to take the ship into Tholian space to capture a starship from our universe. While the mutiny was ultimately unsuccessful, there was no choice but to continue the mission, since the ship was locked on auto-pilot. The Enterprise was later destroyed by Tholian ships, but not before the Mirror Universe took control of the Defiant. The Defiant was used in a bid for power, and Hoshi Sato declared herself Empress.

By 2267, the Terran Empire was the dominant power in the Alpha Quadrant. When four Star Fleet officers (Captain James T. Kirk, Lieutenant Uhura, Lieutenant Commander Montgomery Scott and Doctor Leonard McCoy) from the USS Enterprise were exchanged with those same officers from the ISS Enterprise in the mirror universe because of transporter interference from an ion storm, they discovered the brutal regime, almost dictatorial in its command structure. During the encounter, Captain Kirk convinced the counterpart of his first officer, Spock, that the Empire could not sustain itself. The Mirror Spock predicted that in its current form, the Empire had 240 years before total collapse.

Shortly thereafter, the Mirror Spock rose to become leader of the Terran Empire, proposing a series of reforms designed to make the Empire more secure and less dictatorial in nature. Unfortunately, once these reforms were complete, the Empire was unable to defend itself against the equally aggressive and powerful forces surrounding it. The Klingon-Cardassian Alliance overran the Empire, conquering Earth and leaving Terrans and Vulcans enslaved, and freeing several worlds that still remained under Terran occupation, including Bajor.

With the fall of the Terran Empire, the Klingon-Cardassian Alliance became the dominant power in the Mirror universe. Bajor soon joined the Alliance, and the command post and ore processing facility Terok Nor was constructed in orbit. Also during this time, the forces of the mirror universe began implementing safeguards to prevent another crossover event with our universe. Transporter design was altered to prevent interdimensional travel, requiring the creation of devices specifically for that purpose, including the multidimensional transporter. In the event of another crossover, those involved would be killed to prevent further interference.

By 2370, Terok Nor was commanded by Intendant Kira Nerys. It was at this point in time that the second known contact with our universe took place. A runabout from station Deep Space 9 entered the mirror universe following an incident in the Bajoran wormhole. Kira Nerys and [[Julian Bashir] were captured by forces from Terok Nor, and interrogated by the Intendant. Bashir was sent to work in the ore processing plant, where he befriended the Mirror Universe counterpart of his friend, Miles O'Brien. After instigating a series of incidents aboard the station during a slave uprising, Kira and Bashir convinced privateer Benjamin Sisko to rebel against the Alliance and help them to escape back to "our" universe.

A year later, Mirror Universe "Smiley" O'Brien crossed over to the Federation's universe and impersonated his counterpart long enough to capture our Sisko, and brought him back to the mirror universe, where he convinced Sisko to impersonate the leader of the Terran Rebellion. The mirror Sisko had been killed in a skirmish with Alliance ships, and the rebels needed the other Sisko to win over Sisko's wife, who in the mirror universe was a scientist working for the Alliance. Sisko convinced his wife's mirror-counterpart to defect to the side of the rebels.

In 2375, Grand Nagus Zek, the leader of the Ferengi Alliance in our universe, used the multidimensional transporter to travel to the mirror universe along with his Hupyrian manservant, hoping to open up business opportunities, but was captured and held hostage by the Alliance. Kira made arrangements to obtain our universe's version of the Klingon cloaking device in exchange for Zek's return.

Quark and Rom decided at the last minute that they couldn't trust her, and so accompanied her to the mirror universe, where they were captured by the Terran rebels. Quark, Rom, Zek and Zek's servant were rescued and allowed to return to their universe.