Not to be confused with the Romulan Bird-of-Prey 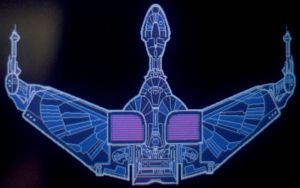 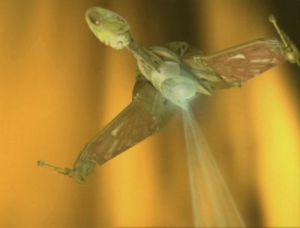 The Klingon Bird-of-Prey is a type of warship utilized by the Klingon Empire, serving the Klingon Defense Forces from the late 23rd century into the late 24th century. This type of craft is one of the most versatile warships employed by the Empire, serving a variety of mission roles, including that of a scout, raider, patrol ship, and cruiser. It has only five decks, and a crew complement of 6 to 12, with the ability to hold up to four prisoners.

There are several class designations to the different types of the Bird-of-Prey design, including the K'vort-class, B'rel-class, and D12 class.

A well-publicized encounter with a Bird-of-Prey occurred in 2285, when a Bird-of-Prey conducted a mission to uncover the secrets of Project Genesis. After acquiring the information, the ship destroyed two starships before facing off against the USS Enterprise in orbit of the Genesis Planet. The Klingons lost against the Enterprise, and James T. Kirk captured Starfleet's first Klingon Bird-of-Prey.

In 2293, one prototype Bird-of-Prey had the unique ability to fire torpedoes when its cloaking device was engaged. This Bird-of-Prey was destroyed at the first Khitomer conference.

Said to be equipped with the Klingon Empire's "best weapons" and "finest warriors," they were typically designated for peaceful missions, but always "prepared to go into battle instantly." The typical offensive arsenal included two forward-firing wing-mounted disruptor cannons, two photon torpedo launchers, and deflector shields. By the 24th century, at least one ship of the class was armed with phasers, rather than disruptors, and possessed a weapons range that exceeded 40,000 kilometers.

In general, the firepower of a Klingon Bird-of-Prey varied by ship and era, due largely in part to their constant upgrades. During the 2280s, a Bird-of-Prey was said to be "out-gunned, ten to one" by a Constitution-class battle cruiser. The Bird-of-Prey was considered to be "no match" for the Federation's Galaxy-class during the latter 24th century; the Bird-of-Prey was also significantly inferior to the Federation's Defiant-class as well. Despite these design liabilities, the Bird-of-Prey proved more than a match for several other contemporary vessels. The most vulnerable spot on a Klingon Bird-of-Prey was located the underside of the ship's hull. While weak, this section was able to withstand sustained phaser fire with the shields down. This area was, however, unable to withstand a shot from a system-5 disruptor, which was capable of breaching the hull within two shots. The Bird-of-Prey's neck was one of the more resistant sections of the ship, capable of withstanding the change in pressure caused by a hull breach.

Birds-of-Prey were typically outfitted with a cloaking device – the key to the ship's success in battle. The first 23rd-century models' cloak could permit the use of communications and/or the ship's transporters, but its operation could not be maintained while the ship used its weapons systems and shields. Additionally, the cloak left an "energy surge" that could be picked up on close-range sensor scans as a "distortion", tipping off an observant opponent to the vessel's presence. There was approximately two seconds of vulnerability from the time a Bird-of-Prey's cloak began to engage or disengage and the raising or dropping of the ship's shields. In the mid 2290s, an advanced Bird-of-Prey prototype was developed that could fire weapons while cloaked and did not display the characteristic "energy surge." However, that model's cloak could not mask neutron radiation or high-energy plasma, such as the exhaust from the ship's impulse engines.

Under normal conditions, a Bird-of-Prey was capable of making at least warp 8.

At least two tractor beam emitters were located on the ventral sections of the Bird-of-Prey, specifically on the "head", behind and below the torpedo launcher, and between the wings, below and in front of the impulse engines. 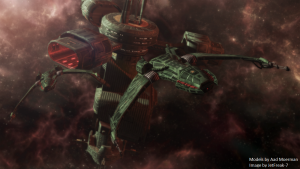