The USS Enterprise (NCC-1701) was a Constitution-class heavy cruiser launched in 2245. In the course of her career, she became the most celebrated Federation Star Fleet vessel of the 23rd century. In her forty years of service and discovery, through upgrades and at least two refits, she took part in numerous first contacts, military engagements, and time-travels. She achieved her most lasting fame from the five-year mission (2265-2270) under the command of James T. Kirk.

Captain Christopher Pike commanded the Enterprise from the early 2250s into the 2260s. Pike's half-Vulcan science officer, Spock, who served under him for over eleven years, would become the starship's longest-serving officer. 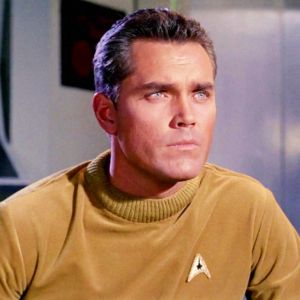 In 2250, Pike was promoted to Captain and was given command of the Enterprise, where he served until 2265. Pike was considered to be one of the most highly decorated starship captains in Starfleet history.

In 2254, Pike led a landing party to Rigel VII, in which they were attacked by Kaylar warriors in what seemed to be an abandoned fortress. Three crewmen were killed, seven injured, including Spock. This weighed heavily on Pike, and he began to question himself as a commander. But his crew insisted he push on, and they continued coming to the aid of those in need.

After Captaining the Enterprise for more than 11 years, Pike was promoted to Fleet Captain, and James T. Kirk took over command of the Federation’s flagship. 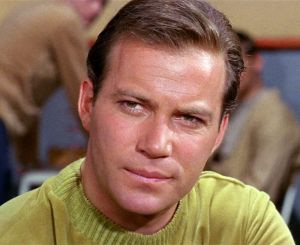 “Leave bigotry in your quarters; there’s no room for it on the bridge.”

Arguably the most famous and highly-decorated starship captain in the history of the Federation, Jim Kirk was both a dalliant and a leader. He famously “beat” the Starfleet Academy test the Kobayashi Maru, and went on to become the youngest Captain in the fleet at that time.

Kirk repelled the first Romulan attack inside Federation space in over a century, on stardate 1709.2. Four Outpost Stations along the Romulan Neutral Zone were destroyed by a Romulan Bird-of-Prey. Kirk and the Enterprise disabled the ship before the Romulan commander could order a self-destruct. The Enterprise crew became the first Starfleet officers to make visual contact with a Romulan during this confrontation.

Along her travels during her Five Year Mission, the Enterprise discovered the SS Botany Bay. The ship was carrying a group of genetically-engineered Augments from Earth's Eugenics Wars, being kept alive in a cryogenic freeze. Their leader, Khan Noonien Singh, went on to seduce the Enterprise’s resident historian, used her to revive his comrades, and then attempted to steal the Enterprise. Able to stop his plan, Kirk exiled Khan and his comrades to Ceti Alpha V, where they could live without affecting the lives of others. This would unfortunately come back to haunt Kirk, especially since neither Kirk nor Starfleet ever followed up on the colony’s progress, and the colony had suffered due to cataclysmic effects on the planet. Khan held Kirk solely responsible, and went to great lengths to draw him to the planet, and take revenge. After multiple battles, Kirk and his team were able to out-smart and out-deceive Khan, and Khan destroyed himself and his ship, hoping to have taken Kirk out with him.

When the Enterprise reached the end of her five-year deployment in 2270, Kirk ordered a course be set, returning her to Earth. Kirk was promoted to Rear Admiral, taking command of the Enterprise a few years later when the entity known as V’Ger was discovered heading towards Earth, destroying everything in its path. He would later take command of a ship called the Enterprise-A in 2286, Captaining her for seven years before retiring. 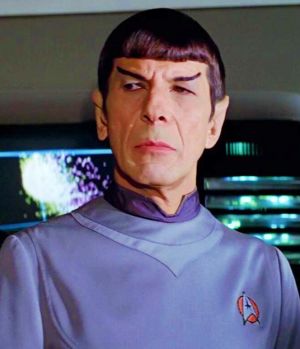 After the incident with V’Ger, Spock was promoted to Captain and assigned to Starfleet Academy. He trained cadets using the Enterprise, since the ship had been retired from active service.

In 2285, Spock handed over command of the Enterprise to Kirk in order to help with his mission regarding Khan. During this mission, Spock sacrificed himself in order to repair the damaged ship’s plasma conduits. However, his coffin (which was shot out into space) landed on the “Genesis Planet”, and his body regenerated, bringing him back to life.

During his elder years, Spock went into semi-retirement, acting as a Federation Ambassador for Vulcan. 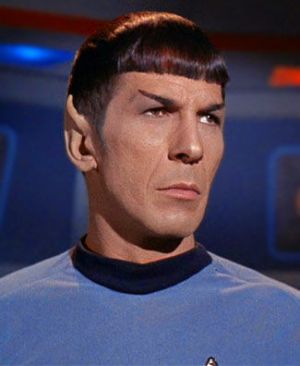 Born to a Human schoolteacher (Amanda Grayson) and an Vulcan scientist and diplomat (Sarek), Spock was one of the most distinguished and respected figures of the Federation in his lifetime. Though his mixed heritage caused problems throughout his formative years, he eventually learned the Vulcan way of suppressing his “human emotions.” Against his father’s wishes, Spock joined Starfleet Academy in 2249, causing the two of them to not speak for eighteen years.

Around 2254, he was assigned to the USS Enterprise, and the subsequent Enterprise-A, where he served until 2293. Known as extremely loyal, Spock risked his reputation to help his old Captain Pike live out his last days comfortably, and later helped Captain Kirk while coming to head with his self-proclaimed nemesis, Khan.

Spock’s interests included the arts, music, various literatures, poetry, and playing three-dimensional chess. As most Vulcans were, he was vegetarian. He had a passion for diplomacy, and worked towards unifying the Romulans and the Vulcans, who shared a common ancestor, and had once lived as one people. 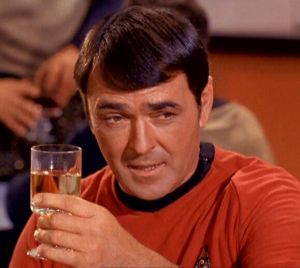 “I have spent my whole life trying to figure out crazy ways of doing things.”

Commonly known as “Scotty,” Mr. Scott was the Chief Engineer of both the Enterprise and the Enterprise-A. His entire career spanned 50+ years, totalling eleven ships. He was most proud of the Enterprise, once even starting a bar fight on Deep Space Station K-7 over the ship’s reputation.

By the 2260s, Scotty knew more about a Constitution-class ship’s warp engines than the people who had designed them. His working knowledge earned him the reputation of being a “miracle worker,” able to save the ship and her crew many times where they found themselves in a tight spot. Due to this, he was a guest of honor during the launch of the Enterprise-B in 2293.

Scotty was known to love Scotch whisky, and often made references to drinking it, referring to himself as an “old Aberdeen pub-crawler.” He was also known for his talent with the bagpipes, notably playing “Amazing Grace” at Captain Spock’s funeral in 2285. 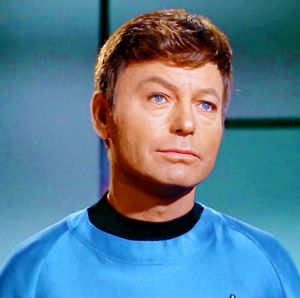 “I'm trying to thank you, you pointy-eared hobgoblin!” (to Spock)

Given the nickname “Bones” by Captain Kirk, McCoy was the Enterprise’s medical doctor and surgeon. He performed many medical feats, even tending to the silicon-based lifeform the recently-discovered Horta. He often displayed a reluctant usage of technology, believing that while the body had a natural and effective ability to heal itself, and that pain built character, medicine had until recently been quite barbaric.

The friendship between McCoy and Kirk went back to before they served together on the Enterprise, and they were known to enjoy drinks together. The good doctor kept a stash of Saurian Brandy somewhere in Sickbay, though he usually preferred the Earth drinks Kentucky bourbon, Tennessee whiskey, and the mixed drink Mint julep. McCoy’s other closest friendship was with Vulcan officer Spock, who accidentally-on-purpose implanted his soul into McCoy’s subconsciousness before sacrificing himself during the Enterprise’s encounter with Khan. McCoy’s behavior became erratic as he became more like Spock and less like himself, and Kirk and the Enterprise took it upon themselves to find Spock’s body and restore the two men.

In 2269, McCoy was promoted to Commander, and held the rank for 25+ years. During the Enterprise-D’s first mission, a 137-year-old Admiral McCoy inspected the ship, pleased there was another ship to hold the name “Enterprise.” In speaking with Lieutenant Commander Data, Doctor McCoy commented, “You treat her like a lady, and she'll always bring you home.”

“May the Great Bird of the galaxy bless your planet.”

Assigned to the Enterprise as its helmsman in 2265, he was also the Head of the Astrosciences (Astronomy) Department. Often the wheelman for Jim Kirk whenever he needed him, Sulu quickly became a command division officer, becoming Senior Helmsman by 2266. Pavel Chekov would take over Bridge Tactical Officer in 2267, and as the two worked side-by-side, they quickly became life-long friends.

In his off-time, Sulu was a devoted botanist, spending most of his free time tending to rare and delicate plants, which had been cultivated from all over Federation space. He was also a recognized expert on antique firearms and small arms, and enjoyed swordplay as well, specifically fencing. For exercise, Sulu employed the art of Judo, capable of defending himself against much larger opponents. 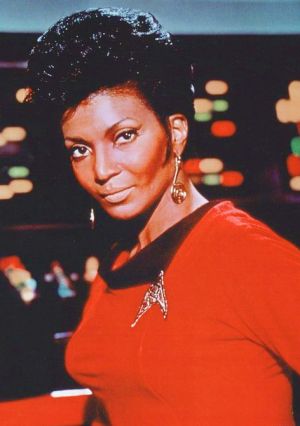 As the Department Head of Communications on board the Enterprise, Uhura was the main communications officer, and served as such under Captain Kirk for both the Enterprise and Enterprise-A. She was an expert in linguistics, and could speak several languages. A Bridge officer, she was able to man the helm, the navigation controls, and the main science station when needed to. The Captain may have had a Yeoman to manage him, but Uhura managed the Bridge.

In 2267, Uhura had her memories wiped by the probe Nomad, which believed “that which is imperfect must be sterilized.” The probe believed that Uhura’s singing was a biological malfunction, and reset her mind back to what a computer would consider “factory settings.” Dr. McCoy was able to use both medical and educational techniques to restore her memories and language skills, and Kirk went on to challenge the probe using a logic riddle, and it destroyed itself.

When the Enterprise returned to Earth in 2270, following the completion of their five-year mission, Uhura took a posting at Starfleet Academy teaching Special Communications. In 2277, she was assigned to Cadet Training and Starfleet Command Communications. 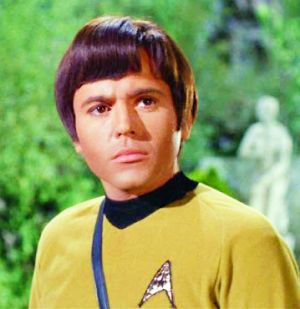 "Scotch? It was invented by a little old lady from Leningrad!"

The proud Russian ensign began his career on the USS Enterprise fresh out of the Academy in early 2267. He was the main navigator of the ship, and served as back-up for the science console when Mr. Spock wasn’t available. Usually sitting next to him on the Bridge was Helmsman Sulu, who quickly became his best friend.

In the early 2270s, Chekov was promoted to Lieutenant, and became the Security Chief as well as a Tactical officer once the Enterprise had undergone a refit. Once he was promoted to Commander, he was assigned First Officer of the USS Reliant. The Reliant served at the pleasure of Dr. Carol Marcus and her son, Dr. David Marcus, who were looking for a suitable planet for their experiment, Project Genesis. Unfortunately, their search led them to Ceti Alpha V, and Khan, who commandeered the Reliant and stole their research in 2285.

Khan tortured the crew of the Reliant using Ceti eels, which burrowed in the subject’s head via their ear canal, causing extreme pain, rendering them extremely susceptible to outside suggestion. Over time, a person suffers extreme madness, and then death. The capture of the Reliant lured Khan to him, furthering his plans to take revenge on Kirk. Despite the torture, Chekov survived his encounter with Khan, helping Kirk to destroy Khan and the Genesis Device.

Chekov’s final mission was on the Enterprise-A in 2293, escorting the Klingon Chancellor to peace negotiations on Earth. Later that same year, he was a guest of honor on the Enterprise-B, and then officially retired.