The Galaxy-class was a Star Fleet vessel first introduced in the late 2350s. It was the largest and one of the most powerful Federation starship classes of its time, with many serving in the Dominion War.

The Galaxy-class began development in the 2350s at Utopia Planitia Fleet Yards. Numerous technologies implemented on Galaxy-class starships were tested aboard earlier prototype vessels, including the Oberth-class ship USS Pegasus in the 2350s.

The warp core was designed at Outpost Seran-T-one on stardate 40052 by some of the most brilliant engineering minds in the Federation, including Leah Brahms of the Theoretical Propulsion Group.

Major component construction of Galaxy-class ships was carried out both in orbit and at ground based facilities.

Upon its launch, the Galaxy-class became the most technologically sophisticated and complicated ship ever built by the Federation.

The great size and capability of Galaxy-class starships made them extremely prestigious assignments, attracting Star Fleet's best and brightest. They were noted for their impressive abilities among Federation citizens and other Alpha Quadrant races. The Galaxy-class was unique among Star Fleet vessel designs in assuming a large civilian population, and so many personnel brought their families aboard.

In 2365, the safety of the Galaxy-class, in particular its warp propulsion system, came into question when the USS Yamato was lost in a mysterious accident near the Romulan Neutral Zone. The ship had experienced massive systems-wide failures which eventually led to a loss of antimatter containment. Further investigation by the Enterprise-D revealed the malfunctions were as a result of an Iconian software transmission and not a design flaw inherent to the ship.

Undoubtedly the most prominent early Galaxy-class starship was the USS Enterprise, NCC-1701-D , which apart from two brief periods under the command of William T. Riker and Edward Jellico was commanded for its entire nine year career by Captain Jean-Luc Picard. Enterprise made first contact with a multitude of new species, including the Q Continuum, the Ferengi Alliance and the Borg Collective. Its diplomatic efforts helped cool tensions between smaller, regional powers and prevent dramatic upheavals to the security of the Federation during the Klingon Civil War, and frequently checked Romulan and Cardassian operations in tense situations. It fought off some of the Federation's toughest foes, preventing the assimilation of Earth during the Borg invasion of 2367. 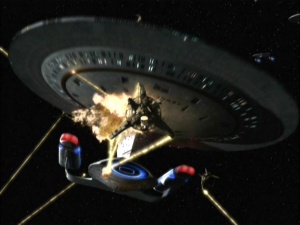 The USS Galaxy at the First Battle of Chin'toka

A Galaxy-class ship was involved in the disastrous first contact with the Dominion. The USS Odyssey had entered the Gamma Quadrant in order to rescue several Federation citizens who had been taken captive by the Jem'Hadar. While the Odyssey was retreating, a Jem'Hadar attack ship made a suicide run at its stardrive section, causing a massive hull breach and the complete destruction of the ship. This unwarranted act led to three years of hostilities between the Federation and the Dominion, before the outbreak of the Dominion War.

Galaxy-class starships saw action in many of the major fleet actions of the war, including Operation Return, where the class also played a major strategic role, grouped into Galaxy wings, the first Battle of Chin'toka, and the Battle of Cardassia.

Several more starships entered the fleet inventory during the 2370s. By the latter half of the decade, Galaxy-class ships were seen all around Federation space, from stations near Earth to near the Romulan Neutral Zone.

The Galaxy-class had two hull sections: a saucer-shaped primary hull and a secondary hull which mounted the two warp nacelles. The hulls were capable of reversible saucer separation and were both equipped with independent flight and combat capabilities. Generally, civilians and non-essential personnel would evacuate to the saucer section, while the senior staff confronted a threat in the "battle section," which contained the majority of the weapons systems.

The hull of the Galaxy-class was left somewhat customizable; areas such as Deck 8 were designated as unfinished and multi-purpose, in the event that extra space was needed for a specific mission.

The computer system on board the Galaxy-class was isolinear based, the most advanced circuitry of its time available to Star Fleet.
Computer systems were concentrated in a computer core, which was accessible through a maintenance room.
Each Galaxy-class vessel carried a total of three independent computer cores; two located in the saucer section and one in the engineering section. 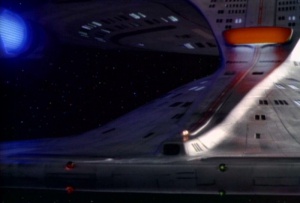 Galaxy-class ships achieved warp flight through two warp nacelles, which housed multiple pairs of warp coils. The acceleration delay between slow-reverse impulse and top warp speed, or about Warp 9, was 0.300 milliseconds. The maximum speed was warp 9.6, which could be maintained for approximately twelve hours. The warp core was one of the most powerful in Star Fleet, generating approximately 12.75 billion gigawatts of power. The efficiency of the warp drive could be adjusted to a point where it rivaled the new Intrepid-class ships introduced in 2370.

The warp core itself spanned twelve decks in the engineering hull. The deuterium tanks were above the core, while antimatter storage pods surrounded the base of the core on Deck 42. 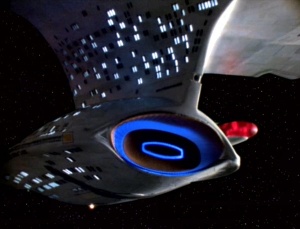 The navigational deflector dish of a Galaxy-class starship

Galaxy-class ships supported a wide variety of scientific equipment and laboratories studying many different disciplines. The departments often had to compete for limited resources such as sensor time, which were allocated by the operations manager or, on occasion, the executive officer. 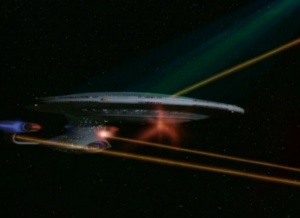 A Galaxy-class starship fires its phasers and photon torpedoes 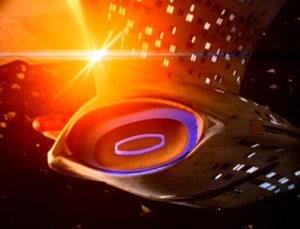 The Galaxy-class was equipped with ten phaser banks, located at various points along both hulls. One array was located on the top of the battle section and could only be used following a separation. There were also torpedo launchers on either side of the engineering section. Each launch tube was capable of firing at least five photon torpedoes simultaneously, each torpedo capable of being independently targeted. In the 2360s, Galaxy-class ships typically carried about 250 photon torpedoes. The torpedo launchers were also capable of launching probes. The Galaxy-class was also supported a high-capacity deflector shield grid. 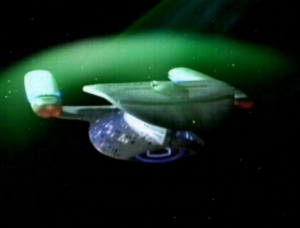 The deflector shields of a Galaxy-class starship's secondary hull

While Star Fleet policy permitted the immediate family of officers and crew to stay aboard starships prior to the advent of the Galaxy-class, it was the first class specifically tailored to accommodate civilian as well as Star Fleet personel. Civilians were allowed to hold varying positions in the sciences division aboard the Galaxy-class. 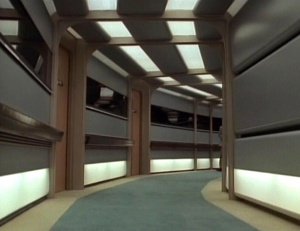 With the presence of families and non-Star Fleet personnel aboard, the Galaxy-class interior was mostly designed for their comfort and the well being of the crew in general. While the major command sections maintained form and functionality above all, there remained a much more "relaxed" feel about the design of many of these areas. 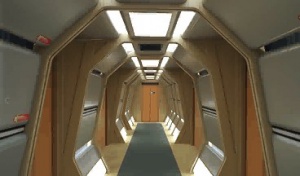 A corridor in the engineering section 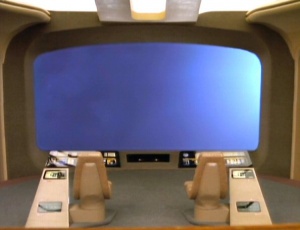 The ops and conn consoles

The main bridge of the Galaxy-class was located on Deck 1 of the saucer section. As with most starships, the main bridge was modular and could be completely replaced with another bridge if the need called for it.
Different Galaxy-class starships had slightly different bridge designs.

The forward bulkhead was usually dominated by the main viewscreen. Directly behind this screen were the operations manager and conn positions. At the very center of the room was the command area – the captain's chair at the center, flanked by chairs for the first officer to the right, and an additional officer to the left. Smaller backless seats could be located on the edges of the command area, for other officers to sit, should the need arise.

By necessity, the Bridge had easy access to and from all other important areas of the ship. In all, there were six doors leading from the room. They led to rooms or corridors such as a bathroom, the observation lounge, a standard turbolift, and the Captain's Ready Room. As the main bridge housed so many critical systems, numerous emergency environmental and power backups were included so that duty personnel could continue to work for up to 72 hours in the event of a major shutdown or incapacitation of the vessel. Other safeguards included seven redundant safety interlocks to prevent the life support from being turned off on the bridge.

Located on Deck 8, it is connected to the main bridge and other vital areas of the ship by an emergency turbolift. It was designed to control the stardrive section following a saucer separation. Unlike the main bridge, there was much more focus on combat and tactical systems and no science stations. The battle bridge was modular like the main bridge; at least two variants have been seen aboard Galaxy-class ships.

Usually located directly behind the main bridge. The room was usually used as a conference room for the vessel's senior staff. A conference table with seating for ten people was the main feature of the room, with LCARS screens on the port and starboard walls for information displays and retrieval. Holographic emitters embedded within the table could also be used for presenting data. 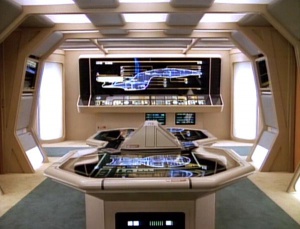 The "pool table" and the MSD

Located on Deck 36, it is an open-plan facility, directly accessible from the corridor, and spans 12 decks. Consisting of two levels, Main Engineering provided direct access to the vessel's warp core and primary engineering support systems. Towards the warp core, the chief engineer's office and several support consoles were located on the left, and the assistant chief engineer's console on the right. These formed part of the bulkhead protecting the main part of Engineering from the warp core. Access to the upper level, a circular area surrounding the warp core, was provided by a ladder to the left of the warp core or an elevator on the right. The upper level had access to other warp core maintenance systems. Engineering could also serve as a backup to the main bridge if it was damaged or disabled.

In the event of a major failure, such as an imminent warp core breach, engineering was equipped with isolation doors and forcefields to contain various sections of the facility.

The Galaxy-class medical department was charged with providing health care to the ship's company and all attached personnel, and possessed equipment to treat a variety of species.

The Galaxy-class starship housed over one-hundred separate scientific research labs. Very few of the research labs remained under the same discipline of science for more than six months. Most shared the same design; only a few had extremely specialized equipment. 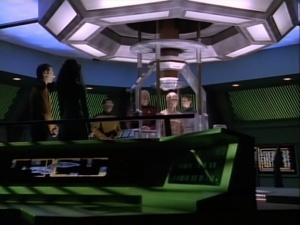 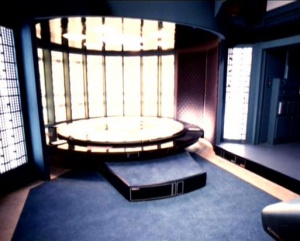 Mostly located in the ship's saucer section in order to provide safety for civilian and non-essential personnel during a saucer separation. The engineering hull also contained crew quarters, generally containing engineering personnel and their families. Pets, including cats and dogs, were also allowed aboard a Galaxy-class ship.

There were several types of crew quarters aboard: