The term first contact describes the first official encounter between representatives of two races or governments. Typically, first contact is only initiated by the Federation if a civilization is sufficiently advanced and has developed interstellar travel (via warp drive, for example). Contact with more primitive civilizations is prohibited by the Prime Directive. It has been stated that it may be best to approach a new civilization's scientists and intellectual leaders first, in private, on the assumption that they would have minds open enough to easily grasp the concept of alien life. Most cultures recognize a successful first contact as a momentous occasion.

First contact procedures were a part of the Bridge Officer's Test. 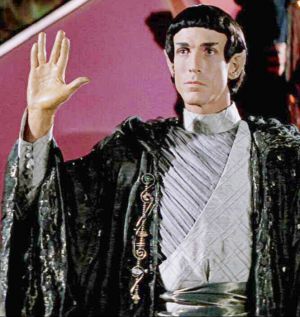 Vulcan-initiated first contact with Humans took place on the evening of April 5, 2063, when a Vulcan survey ship detected the warp signature of the Phoenix earlier in the day. The Vulcan ship touched down in Bozeman, Montana, where they met with the Phoenix's designer and pilot, Zefram Cochrane. This event is generally referred to as the defining moment in Human history, eventually paving the way for a unified world government and later, the United Federation of Planets. The specific day also became an annual holiday, "First Contact Day."

In April of 2151, a small Klingon craft was returning to Qo'noS with evidence that Suliban Cabal was responsible for recent internal strife within the Klingon Empire. Being pursued, the craft crash-landed on Earth in Broken Bow, Oklahoma. Though managing to escape the pursuers, the Klingon pilot was shot by a Human farmer. Against the urgings of the Vulcans, Earth Star Fleet launched its first warp 5 vessel Enterprise NX-01 to return the wounded Klingon to Qo'noS. Despite this honorable task, Human contact with the Klingon Empire was considered a disastrous event that led to decades of war. Based on this bad experience, it was decided to conduct surveillance on new races before making contact.

First contact with the Akaali was made by the Enterprise in 2151. This was significant due to it being the first Human-initiated first contact. Despite the Vulcan advice to not contact the primitive Akaali society, Captain Archer took a landing party to the surface. However, by doing so, the Enterprise did uncover a secret mining operation by the Malurians, who were exploiting the planet and its people for veridium. The Malurians' mining process caused many Akaali to suffer from a serious disease, causing lesions on their faces, and in an act of good will, the Enterprise drove the Malurians off the planet.

First contact with the Gorn took place in 2267, when they attacked the Federation colony on Cestus III.
The Gorn saw the strike as a preemptive move, since they regarded the system as part of their territory. James T. Kirk was the first Federation officer to physically confront a Gorn, following his pursuit of their vessel in response to the attack on Cestus III.

Formal first contact with the Borg was forced upon the Federation in 2365, by the entity known as Q, a member of the Q Continuum. The encounter stemmed from an argument between Picard and Q, where Q claimed the Federation is not prepared for what is out there waiting for them, and Picard rebuts with Humanity's readiness to confront the unknown. As a counterpoint, Q flings the Enterprise several thousand light years away, and then leaves. Against warnings to head towards home at once, Picard decides to explore the nearest system first. A Borg cube approaches the Enterprise and casually begins boarding the ship, and the Enterprise crew find themselves useless against their enemy. Finally pleading with Q to return them to safety, Picard and his crew escape the Borg.

Ancient Bajorans first established contact between Bajor and Cardassia Prime through the use of a Bajoran lightship. Although traveling at sublight speeds, the ship was eventually propelled by a tachyon eddy to warp, enabling the ship to bypass the hazards of the Denorios belt. Cardassian archaeologists claim the vessel's remnants were discovered on Cardassia Prime in 2371, coinciding with the arrival of Benjamin and Jake Sisko on a replica lightship. Cardassians had previously dismissed Bajoran claims of first contact as a "fairy tale", disputing that Bajorans achieved interstellar flight first.