Jane had an unsettled childhood. Her parents did not marry and were together only briefly, after which they led entirely separate lives. Jane’s earliest years were spent with her maternal grandmother in Yorkshire, England. Parental visits were infrequent, though mother and father did keep in contact. Jane never developed a strong relationship with her mother and was only 7 years old when she died. At the age of 11, Jane was packed off to a boarding school, but ran away repeatedly until being expelled. Jane did not attend formal schooling after this date, and is largely self-educated. From the age of 13 she accompanied her father on trading trips in the Alpha and Beta quadrants. Victor had affection for his daughter, but he was an irresponsible, somewhat weak character who was prone to heavy drinking. After Victor’s death the 17-year old Jane took over his small cargo ship and continued to trade, often getting involved in somewhat dubious smuggling activities.

Jane was 22 when she had her first encounter with Star Fleet. Her ship was transporting an illicit shipment of dilithium when it was intercepted near the Neutral Zone by a Star Fleet vessel. Jane was planning to offload the cargo at a rendezvous with an Yridian freighter. It was set to be a profitable trade. Jane had picked up the cargo from a Ferengi trader on Lappa IV. It had apparently been ‘acquired’ (i.e. stolen) from the Federation. Unbeknown to Jane the dilithium had actually come from the Romulans and was tainted with deadly polonium particles. The Romulans were plotting to spread this radioactive substance across the quadrant, as any ship using the dilithium would have released minute but ultimately deadly polonium particles from its warp core.

When the Star Fleet Cruiser intercepted Jane’s vessel, the scan of the hold revealed the true nature of the dilithium. Jane helped the Commanding Officer, Captain Sur’er, to uncover the truth behind the cargo. It didn’t take her long to track down the Ferengi trader who sold her the shipment. A little not so gentle persuasion and Jane used him to lure the Romulans into a meeting where they incriminated themselves. What’s more, she even managed to hoodwink them into accepting back the tainted dilithium.

As a result of this encounter, Captain Sur’er befriended Jane, and this proved to be a turning point in her life. Until this time Jane had been lacking direction and purpose. She had grave doubts about her suitability for Star Fleet training, but mustered the courage to abandon her previous life and take up a very different one. Jane was close to choosing Science as her major, but an initial lack of confidence (unfounded) in her academic ability led her to opt for Security. For 9 months leading up to her Star Fleet entrance exams, Jane studied engineering, science, and mathematics through home study courses. She also practised Academy-style entrance exams until she felt confident enough to attempt the real thing. Jane was relieved when she passed her real exams and was accepted into the Academy at the age of 24.

While a Lt [JG] on the Copernicus, Jane learned from a time-shifting Commander Gloria Dys that she had become Captain of the USS Copernicus in a future, alternate timeline. This knowledge helped erase any self-doubts about her vocation. Although this is only one possible version of the future, it gave her confidence that she had the potential to succeed in her Star Fleet career.

It was under Gloria's mentorship that Jane took the Bridge Officer's Test. The training involved a scenario that forced her to confront one of her worst fears, sacrificing a crew member to save the lives of many others. It was here that she relived losing one of her valued Security team, PO Joseph Friday. However, Jane overcame this trial, showing cool and calculated leadership under pressure; she passed the test and was awarded the Command School ribbon.

Jane and Gloria Dys became virtual sisters, a bond strengthened by Jane's rescue of the Ferengi-Human woman from the clutches of the Orion Syndicate on a planet called Helven VI. The rescue mission was given the approval of Captain Stovon Stewart, but remained a 'black ops' style operation without official Star Fleet sanction. Jane headed a small team consisting of Sring, Jack Crab and a Marine Jason Sutherly. With the girlish Sring disguised as a child slave, Jane infiltrated the inner sanctum of the Syndicate leadership on Helven VI where Dys had been held for some months, herself a slave, abused and forced to work the Dabo tables of a sleazy club called Taboo. Jane and Sring succeeded in rescuing Dys just as a trio of two Cardassians and a Romulan woman were engaged in purchasing her - in full knowledge of the value of a time-shifted Star Fleet officer. After some carnage, the team was able to extract from the planet with Commander Dys and a transwarp ship which Gloria had arrived in back from the future. The experience on Helven VI forced Jane to confront a number of personal demons and her previous life as a shady commercial trader, not to mention her own parents' deaths at the hands of the Orion Syndicate. She remains tight-lipped about the events on the planet, and only Sring is aware fully of all the details.

More recently Jane has developed a closer relationship with the younger version of Gloria Dys now known as Alora Dys, and she looks upon the Science officer as a kid sister, and she became Jane's first First Officer when Jane became Captain.

Her personality has softened over the years of being Captain, but she still protects an air of formality and distance that belies the attachment and protectiveness she feels towards her officers and the ship.

Academy Major(s): Security
Academy Minor(s): Shuttle and fighter piloting, counter-intelligence, forensics
Hobbies and Pastimes: Used to shoot antique weaponry (from using her grandfather's old rifles while a child in Yorkshire), holodeck simulations to keep fit and keep her Security skills honed, cross-country running (in the holodeck, especially in simulations of the Yorkshire Moors), doesn't find time to read much any more but used to read a lot on science and history, chess (she learned the game from her father). Likes Shakespeare and listening to early Terran classical music, but tends to keep this to herself (lest it ruin her tough image)
Short-Term Goals: To look after the ship and crew
Long-Term Goals: Continue to be CO of the Copernicus and 'die in her boots'
Personality: Quick-witted. Cynical. Something of a loner, Jane has a façade as hard as nails (in place as much to fool herself as other people), but underneath is more sensitive. She has difficulty trusting others, but once she makes friends is fiercely loyal, honest and brave. Has a very maternal attachment to the Copernicus itself and her crew.
Sense of Humor: Dry at best, but frequently sarcastic
Phobias: None
Likes: People who speak their mind
Dislikes: People she sees as being from privileged backgrounds (Jane has something of a chip on her shoulder). Challenges to her authority
Pet Peeves or Gripes: People making incorrect assumptions about her
Bad Habits or Vices: When she was young Jane dabbled with various narcotics, but gave these up long before joining Star Fleet
Achievements: Won several medals for cross country running at the Academy, and finished in 29th place in the San Francisco Marathon on Stardate 20608.16; twice Academy Velocity singles champion
Disappointments: Not having a relationship with her mother or a proper family life with her parents
Illnesses: Only minor childhood illnesses
Strengths: Quick-witted which helps her to diffuse difficult situations. Crack marksman with a range of weapons. Can be surprisingly diplomatic
Weaknesses: Has trouble taking orders that she disagrees with. Comes across as cold and distant (though in reality takes a keen interest in the people around her)
Fears: None, but Jane does sometimes have recurring nightmares about ghosts. She was terrified of seeing a ghost as a child, and even though she knows such things do not exist, is still slightly uneasy about the concept of ghosts and the supernatural
Prejudices: Doesn’t trust Ferengi
Off Duty Clothing Tastes: Casual or smart casual. Trousers - hardly ever wears skirts or dresses
Distinguishing Features: Pre-Raphaelite looks: almond-shaped eyes, very slightly aquiline nose, a strong chin. Often has an impassive unreadable expression, but tends to give people examining looks. She has a restrained but warm lopsided smile when amused. On occasions when she lets her full emotions show it tends to be quite dramatic - her smile is a broad grin that creases up the entire face 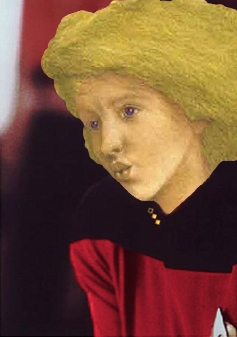 Most Painful Experience: Death of her father
Best Time: Arriving for her first posting on the USS Copernicus
Most Crucial Experience: Meeting Captain Sur'er who encouraged her to join Star Fleet, and meeting Commander Goria Dys, who was her first close friend and told Jane about the future in which she had become CO - this gave her the confidence to succeed in her Star Fleet career
Role Model: Captain Elisa Godard, her first CO, and an inspirational and supportive CO of the USS Copernicus