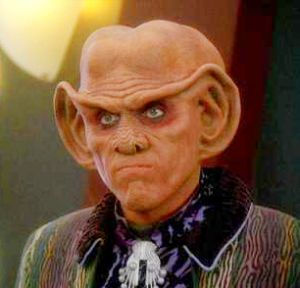 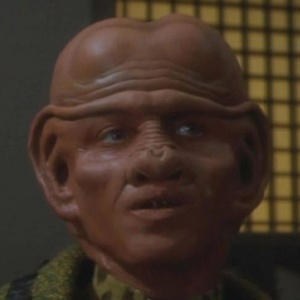 "Never ask when you can take"

The Ferengi are a spacefaring humanoid species native to the planet Ferenginar. Ferengi civilization was built on the ideals of free enterprise, where all other goals are subjugated to the pursuit of profit. Their governing body, known as the Ferengi Alliance, was formed over a period of ten thousand years, beginning with the establishment of a system of currency, to their purchase of warp technology, and finally to its current state in the 24th century.

On average, Ferengi are shorter than Humans. They have orange-colored skin, enlarged skulls, wrinkled noses, and sharp teeth. Internally, they have ascending ribs and upper and lower lungs, as well as an unusual four-lobed brain that cannot be read by telepathic species such as Betazoids. Ferengi physiology is similar to that of the Dopterians and Kobheerians.

The Ferengi's most distinguishing feature is their large ears (called "lobes"), which give them extremely acute hearing. The lobes of the Ferengi male are typically larger than those of females, and are considered sensual organs. The sensitivity of the ears also makes them vulnerable to pain and other problems, including severe infections of the tympanic membrane which, if left untreated, can become fatal.

The Ferengi heart rate is much faster than that of a Human, and their immune system appears to be strong than that of humans' as well. The rainy climate of the Ferengi homeworld and low-order inveterbrae of Ferengi cuisine would seem to suggest a species that evolved as foragers living close to the ground.

Official symbol of the Ferengi Alliance

The Ferengi Alliance is the main political body of the Ferengi. It is dedicated to the promotion of profit and commerce and is overseen by a Grand Nagus. The Nagus' power is supported by both the Ferengi Bill of Opportunities as well as the document "Rules of Acquisition."

Generally, the Ferengi Alliance stays neutral in the politics of the galaxy, since the Ferengi are solely interested in profit and making enemies diminishes business opportunities. In the spirit of free enterprise, most Ferengi business ventures are made without the knowledge of the government. As a result, while a number of hostile conflicts occurred between the Federation and the Ferengi in the 2360s, the Ferengi Alliance itself was not held responsible.

The importance of business is felt heavily in Ferengi goverment, as powerful businessmen can easily become powerful political figures, representing their companies the way states or worlds are represented in most other cultures.

The neutral tendencies of the Ferengi and their government is evident in the 34th and 35th Rules of Acquisition: War is good for business and Peace is good for business. Counter to intuition, this neutral status often enhances the influence of the Ferengi Alliance in the galaxy. By positioning themselves as interested only in commerce, not only do Ferengi manage to avoid being embroiled in larger conflicts such as the Dominion War, but they also make themselves available as intermediaries. Ferengi trade representatives may often accompany other governments on diplomatic missions where trade negotiations may serve to open the door to more extensive relations between trade partners who might otherwise have difficulty doing business because of the political climate.

In keeping with their neutral tradition, the Ferengi do not maintain a standing military force, and are generally considered ineffectual in most military matters. However, the role of "Daimon" in Ferengi commerce is a quasi-military rank, and the Alliance does provide the use of starships, notably the D'kora class-Marauders, for the purpose of mercantile exploration and, in some cases, defense of business interests.

The Ferengi culture has roots similar to that of the many other species, filled with wars, violence and greed. However, Ferengi managed to avoid many of the worst aspects of an evolving culture, and their social history is notable for the absence of atrocities such as slavery or genocide, a distinction the Ferengi feel makes them morally superior. Ferengi culture slowly grew out of its early stages by introducing a remarkable economic system that developed from early bartering systems to become one of the leading cultures in interstellar commerce.

Unlike most other cultures, who frequently idolize warriors or politicians, businessmen have been the pillars of Ferengi society. This tendency led to the slow merging of business and political fields in Ferengi culture, and that influence is evident in the near universal application of the Rules of Acquisition as both a personal and financial code of ethics. The Rules of Acquisition provide a code that all good Ferengi should follow in order to lead a profitable life. For example, the first Rule of Acquisition is "Once you have their money, you never give it back".

In addition to the "Rules," the Ferengi also recognize the Five Stages of Acquisition: infatuation, justification, appropriation, obsession, and resale. They also recognize these traits in other species; Earth's Wall Street is regarded with near-religious reverence by Ferengi. The drive for individual gain in Ferengi society has led to inventions that have spread across many species of the galaxy. Examples include such diverse items as holosuites, synthehol and the popular brand-name drink, "Slug-o-Cola."

According to traditional Ferengi beliefs, the hammer represents sexual prowess. Actual sexual practices of Ferengi are not well known but oo-mox, manual stimulation of the lobes, is widely practiced and can be performed by non-Ferengi. In accordance with their male-dominated society, it is not unusual for a Ferengi to have female servants who perform oo-mox for him in public as a means of sexual pleasure and to communicate his status by overtly demonstrating that he can afford such luxuries.

In modern Ferengi philosophy, the pursuit of profit at any cost is the guiding principle for all traditional Ferengi. With the invention of currency and the concept of profit approximately 10,000 years ago, Ferengi philosophy began to evolve toward the pursuit of material wealth. This guiding principle became so basic to Ferengi that it was eventually codified in the Rules of Acquisition.

Ferengi religion revolves around the central concepts of profit and the accumulation of wealth. Ferengi spirituality flows largely from their belief in the universe as bound together in the "Great Material Continuum." A Ferengi who lives a good life (one who makes a profit and accumulates wealth) is said to navigate the “Great River” of the Continuum. Such Ferengi are rewarded for their success in interpreting the wants and needs of this life by positioning themselves for success in the next life.

In the case of Ferengi, the mercantile belief in the finite but eternal nature of material accumulation means that you can take it with you. Upon death, a Ferengi finds himself before the Blessed Exchequer, whom Ferengi may pray to in life, and is evaluated on the basis of the profit earned while alive. A successful Ferengi is allowed entrance into the "Divine Treasury," where the wealth he has accumulated can be used to bid on his next life under the supervision of the Celestial Auctioneers. An unsuccessful Ferengi may find himself cast into the "Vault of Eternal Destitution," never to return.

The Ferengi death ritual prohibited autopsy to be performed on a deceased Ferengi. However, it was accepted practice for a Ferengi to auction off his vacuum-desiccated remains after death, providing the opportunity for their loved ones or enemies to own a piece of the Ferengi after his passing and as a final opportunity to raise capital for the soon to be deceased.

Greed, deceit, distrust, and opportunism are highly prized values among Ferengi and all are represented within the Rules. The Ferengi belief in conducting all business dealings under the advisory caveat-emptor, or "buyer beware", further reflects the pursuit of profit at all costs.

Exploitation is a rule in Ferengi society. The formation of labor unions is forbidden, and indeed most Ferengi don't wish to eradicate exploitation but to become the exploiters.

If profit represents the ultimate goal to Ferengi, the loss of profit opportunity represents the ultimate punishment. Ferengi who break the law may be punished with the loss of all property and assets. If the crime is deemed severe enough, the offending Ferengi's family may also suffer loss of profit opportunity, and may even be sold into indentured servitude to repay their debts - both literal and philosophical. The binding nature of contracts is considered a supreme law in Ferengi society and breaking a contract with a fellow Ferengi is a severe crime.

Capital punishment is not unknown among Ferengi but perhaps even more feared is revocation of a Ferengi's business license. Such an action prohibits other Ferengi from conducting business with the offender and virtually ostracizes a Ferengi from his own society, leaving him with so few opportunities for true profit that death might be preferrable. 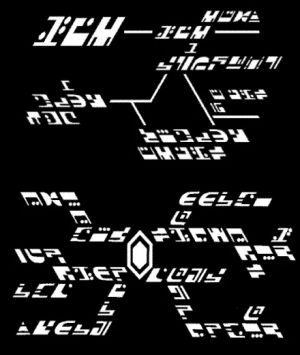 The Ferengi written language resembles a flow chart in appearance, with 60 degree angles and text most commonly emanating outward from a central hexagon. The hexagon may remain fixed, possibly denoting subject or tense, as the text around it flows, branches, expands and changes. Because of the extremely rainy climate of their homeworld, the Ferengi have 178 different words for rain in all its various forms. Conversely, there are no Ferengi words for "crispy," as the condition is largely unknown to them.

There is also "B'Zal," a Ferengi code which uses patterns of light and darkness.

Traditional Ferengi cuisine consists largely of slugs, insects, grubs, and other creatures Humans would call "bugs". Many partake in the beetle snuff habit, snorting a fine powder of dried beetles.

Appropriately for a materially obsessed species, the Ferengi have a demonstrated interest in cosmetic enhancements by way of tooth sharpeners and surgical procedures such as Lobe enlargements to accompany the usual conspicuous displays of wealth.

The traditional laws of the Ferengi are highly sexist and patriarchal by contemporary standards. Unlike Federation, Romulan, and even Klingon culture, Ferengi females are barred from most aspects of society, including politics and business. Laws and traditional social values relegated Ferengi females to the status of second class citizens. In addition to being forbidden to earn profit and own property, Ferengi females are not allowed to wear clothes, leave their homes without male escort, or speak to strange males. Their role as caregiver to the male children of a family is strictly defined. Mothers are expected to teach their children the Rules of Acquisition, and to soften their male children's food by chewing it for them.

However, by the late 24th century, females made up 53.5% of the Ferengi population and some Ferengi began to realize that exclusion of females from business represented a significant loss of profit opportunities. A movement, led by Ishka and, through her influence, Grand Nagus Zek, developed with the goal of reforming cultural traditions that had excluded women. Initial progress toward this goal seemed less than promising, but by 2375, with the ascension of the progressive Rom to the position of Grand Nagus, the likelihood of further reforms seemed inevitable.

Ferengi history reaches back approximately 10,000 of their measurable years, though much of their early history is limited to legend.
The most significant events of early Ferengi history are the creation of the Rules of Acquisition, as well as the merging of business and political philosophies into the office known as the Grand Nagus.

After the evolution of their commerce-intensive society, the Ferengi purchased warp drive technology and began to expand their commercial interests in the galaxy.
Even after at this point, however, the Ferengi were often only known through rumor throughout the Alpha Quadrant. Due to their ambitious and covetous nature,
many Ferengi showed a tendency to not identify themselves to species during a first encounter, and exploit others' lack of knowledge about Ferengi.