John was born and raised in one of the smaller suburbs of London, England. Spoilt by his parents for much of his life due to the belief that his mother could have no more children, John grew up to be an academically gifted but physically weak boy. His main hobbies were reading academic texts, including many of the required texts for Star Fleet Academy; these were given to him by his father, who washed out of the Academy after assaulting an Instructor during a training session.

As he grew older, he was incessantly bullied for his academic leanings and quiet disposition in class and the playground; one particular incident resulted in the scar that he still has on his jaw. Eventually, after pressure from his father, John joined a local self-defense class and learnt enough to defend himself from his tormentors, leaving one with a broken arm. Quickly maturing after this incident, John continued to learn martial arts and exercise, toughening up and helping to protect younger children from the bullies in the school. However, his interests still lay in reading and academic studies, and excelled in Interstellar History, becoming fascinated by the history of the Borg in particular.

At the end of his school years, John was determined to apply to Cambridge University and take up an Interstellar History course, hoping to eventually become a Professor. However, he came under pressure from his father to join Star Fleet Academy and become an Officer. Initially wary of the idea, John was eventually persuaded to join up and become an academic later on in life; John also saw that a stint in Star Fleet could aid him in developing social skills and friendships. Thus, at the age of 18, John became a Cadet and began training. His interest in history, and in particular warfare, led him to choose the route of Security in training. 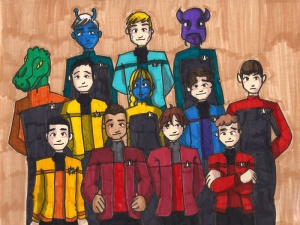 Graduating from the Academy tenth in his class, John was promoted to Midshipman and assigned to the USS Philadelphia, FF-6053, a Berlin-Classed Frigate. He served on the Philadelphia under Captain Shard Vinzz for nearly a year and was promoted from Midshipman to Ensign, and then Lieutenant Junior Grade for good service, although he was reprimanded by Captain Shard for a breach of weapons regulations on an Away Team mission. As a relatively inexperienced Midshipman, John had opened fire on, and killed, an indigenous animal that appeared to be endangering the safety of the Away Team; however, the creatures were later found to be docile, and using his weapon had breached Away Team protocols.

When the Philadelphia was decommissioned, John was transferred to the newly-commissioned USS Ticonderoga, CA-1471, a Fearless Class Heavy Cruiser commanded by Commodore Joseph Daher and promoted to Chief of Security. It was here that he befriended a young Gorn, Zzen Drell, who had recently joined Star Fleet. The Ticonderoga’s first mission was to meet a Romulan vessel attempting to defect to the Federation; to facilitate this defection, John accompanied an Away Team led by the First Officer, Commander Nathan May, onboard a Romulan Warbird. Tasked with securing the high-ranking defector’s daughter, the mission was revealed to be a trap and after a fierce firefight, the Away Team members were captured.

It was here that John gained his hatred of Romulans; during an interrogation, a Romulan officer tortured and then killed Commander May. The Commander was vaporized in front of John, a memory that still haunts his nightmares, and to his immense frustration and anger he was unable to do anything about it. The Away Team survivors managed to escape, with John killing several Romulans, but he was unable to avenge Commander May and kill the Romulan who had murdered the First Officer. In the firefight subsequent to the Away Team’s fate, John’s left arm was crushed under several cargo containers; although he was beamed away with the rest of the Away Team, he barely survived surgery and the arm was amputated.

A bio-mechanical replacement was fitted without a loss of feeling or use, but the combination of losing his arm and his First Officer made a dark impression on John, and he still nurses a bitter grudge against all things Romulan. When the Ticonderoga became involved in the defence of Starbase 157, John led an abortive attempt to board a derelict Romulan vessel; in his desire to board the vessel he clashed with Lieutenant Drell, a moment which revealed to him exactly how much the death of Commander May had affected him.

This sobered him up somewhat and he managed to rein in his feelings, particularly after several sessions with a Star Fleet counselor, and was subsequently promoted to Lieutenant-Commander. He served onboard the Ticonderoga during its ultimately successful attempt to entice the Mirak Confederation to join the conflict against the Romulans. After several more missions, including a First Contact meeting with the advanced Bishtar, John received orders to transfer to the USS Titan, CL-2007, where he was extremely surprised to find himself promoted to First Officer under Captain Alexis Tregelen.

Academy Major(s): Security
Academy Minor(s): Marksmanship, Federation History
Hobbies and Pastimes: Historical research, reading, occasionally drinking
Short-Term Goals: Meet new people, socialize
Long-Term Goals: Serve the Federation and rise in the ranks
Personality: Often tense, can be humorous when personality is drawn out
Sense of Humor: Dry, sarcastic at times
Phobias: Confined spaces
Likes: Reading, Holonovels, Holodeck simulations
Dislikes: Dogs, arrogance
Pet Peeves or Gripes: High-pitched whistling
Bad Habits or Vices: Runs a hand through his hair; if holding a weapon, will constantly check and re-check its power supply.
Achievements: Attaining Chief of Security placement onboard USS Ticonderoga
Disappointments: Failing to stop Commander May being killed. Poor relationship with his father.
Illnesses: Hesperan thumping cough at age 11
Strengths: Dependable during a crisis, extremely loyal when said loyalty is earnt
Weaknesses: Can’t pilot a shuttle to save his life, and nearly failed his entrance exam at the Academy because of this. Obsessive hatred of Romulans may impair his judgement at times
Fears: Capture and torture; enclosure in confined spaces
Prejudices: Romulans, anything related to Romulans
Distinguishing Features: Scar on left side of jaw line from schoolyard accident, retained despite medical advice. Left arm from elbow downwards is a bio-synthetic replacement fitted after Away Team mission to Romulan Warbird resulted in the limb being amputated due to weapons fire.
Pets: None
Friends: None particularly, though friendly with Lieutenant Zzen Drell

Most Painful Experience: Watching Commander May being tortured and killed; losing his arm.
Best Time: Serving onboard USS Philadelphia, and on USS Ticonderoga prior to beginning of current conflict
Most Crucial Experience: Maturing enough to be promoted to Chief of Security
Role Model: Ambassador Worf