The Constellation-class starship was a type of Federation cruiser employed by Star Fleet from the late 23rd century through the mid-24th century. 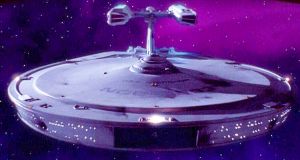 The Constellation-class began service as early as 2285, when at least one such ship, the USS Hathaway, was constructed by at the Copernicus Ship Yards on Luna.

Nearly a decade after the launch of the Hathaway, the prototype for the class, the USS Constellation, NCC-1974, was still undergoing certification trials.

By the mid-2360s, this class of "old-style" star cruiser was on the fringe of being phased out of the fleet.
Those that had been decommissioned, including the eighty-year-old Hathaway, were stripped of their offensive systems and rendered "warp inactive," which included the removal of all antimatter.

Those that remained in service were typically relegated to transport duties. Constellation-class starships were also used in second-line service, including the hastily-organized Federation blockade
during the Klingon Civil War.

In 2369, commander of the Galaxy-class USS Enterprise, NCC-1701-D , Captain Jean-Luc Picard, regarded his former command, the Constellation-class USS Stargazer as being
"an overworked, underpowered vessel that was always on the verge of flying apart at the seams," adding, "in every measurable way, my Enterprise is a superior ship." 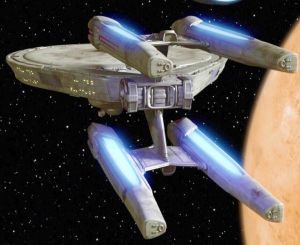 A notable feature of the Constellation-class was that it was one of the few classes in use mounted with four warp nacelles.
This unique arrangement in a starship design was later found in one of the Nebula-class, as well as the Cheyenne-class and Prometheus-classes.

The Constellation-class had a maximum speed of warp 9.

During their original construction, Constellation-class starships employed Avidyne engines. By the latter 24th century, these had been replaced with more effective engines.

Although the layout of the main bridge of the Constellation-class of starships could be described as "standard" in terms of how Federation starship bridges are designed, the Constellation-class appeared to have two prominently different bridge types.
These variations can be recognized between the USS Hathaway, launched in 2285, and the USS Stargazer, last active in 2355.

Main engineering was where the ship's power systems were controlled and was the home of the ship's antimatter warp drive chamber and impulse engine controls.

Cabins aboard Constellation-class starships were of typical design associated with Federation starship of the era, providing spartan accommodations for the crew.