The Command Officer's Test is an advanced Starfleet exam given to starship crewmembers who have passed their Bridge Officer's Test and shown themselves to be competent bridge officers.

The test is required to become a Second Officer, First Officer, and of course, Captain. An officer would not be considered for these positions without their Command Officer Certification. Passing the Command Officer's Test allows a crewmember to serve as a commanding officer in their own right, while an officer who has only passed the Bridge Officer's Test can only take command when the other officers typically in command are unavailable.

Starting 21103.21, the Federation Space Rank Cap Guidelines in the Federation Space Constitution were updated with a requirement for "in-game command training class or certification" for officers wishing for promotion above Lieutenant. Although officers who had passed this rank already were grandfathered in, it is encouraged for them to contact their First Officer and engage in some kind of in-game role playing relating to their Certification.

The test has many stages, including a question and answer portion. It most often takes place on a holodeck. The test should include topics such as Star Fleet Command Rules and Regulations, familiarity with starship design and theory, and a thorough understanding of each department. The test would encompass a situation that the officer would feel least comfortable with, so something outside of their studied departments and outside of their previous experiences if possible. It is not common knowledge that the final exam requires the officer to make a choice that sends one person under their direct command to certain death. 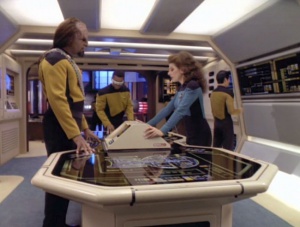 USS Enterprise, NCC-1701-D Chief Medical Officer Dr. Beverly Crusher took and passed the exam in 2362 due a desire to contribute to more than just sickbay. USS Enterprise, NCC-1701-D counselor Deanna Troi undertook the test in 2370, for two reasons: first, she felt she failed when she was forced into command in 2368 due to an emergency situation and second, she had recently attended a class reunion and felt embarrassed she hadn't risen to command status. Troi eventually passed after several failed attempts.