A cloaking device is a form of stealth technology that bends light to make an object, usually a starship, invisible to the electromagnetic spectrum and most sensors.
Many space-faring cultures use cloaking devices on their ships and installations. 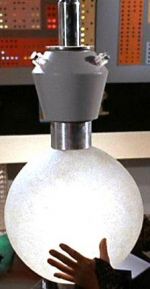 Humanity's earliest-known encounter with cloaking technology was chronologically in 1986. Admiral James T. Kirk, having traveled back in time, decloaked the Klingon Bird-of-Prey he was commanding, in order to frighten whale hunters from killing two humpback whales. This was part of a larger mission to save said animals, and communicate with the being known as V'Ger .

One of Humanity's earliest exposures to cloaking technology was in 2151, when Suliban terrorists boarded the Enterprise, NX-01, undetected, and kidnapped a Klingon national Sickbay. The Suliban in general used cloaking devices on many of their ships, which the Federation found out after the Klingon’s kidnapping.

Another species that used cloaking technology at this time were the Romulans. The Romulan Star Empire was documented as cloaking a minefield in 2152, in order to protect a Romulan-claimed Class M planet. Nothing more about the planet is question is ever revealed.

In 2266, the USS Enterprise, NCC-1701 encountered a Romulan Bird-of-Prey that used a cloaking device to cross the Romulan Neutral Zone. This Romulan ship wiped out several Earth-based Outpost Stations 2, 3, 4, and 8. While the reasonings behind the Romulan attack were never made clear, the Enterprise was able to confront, and defeat, the Bird-of-Prey in battle.

Two years later, the Federation learned that the Romulans had improved their cloaking technology, and now had rendered it impervious to Federation sensors.
Starfleet Intelligence sent their flagship, the Enterprise, to the Romulan Neutral Zone to acquire it. The mission was successful, and the Federation was able to duplicate the stolen technology.

By 2269, cloaking technology became more wide-spread within the Klingon Empire. After being battle-tested, cloaking was installed on many Klingon battle ships, most notably the Bird-of-Prey.

In 2311, the signing of the Treaty of Algeron stated that the Federation explicitly agreed not to develop or use cloaking technology. The Bajoran Provisional Government also outlawed cloaking devices, stating that the possession of such a device was highly illegal.

In 2370, a bar owner on Deep Space 9 illegally obtained a small cloaking device that was, not in the best of conditions, but was estimated to work for about fifteen minutes. With the intention of selling it on the black market, he instead uses it for altruistic purposes instead.

Following the outbreak of hostilities with the Dominion in late 2370, the Romulans allowed the use of one of their own cloaks aboard the USS Defiant. Though this use was granted only to the limited range of the Gamma Quadrant, Captain Sisko ignored this restriction at his convenience. A Romulan operative was then assigned to Deep Space 9 in order to keep a watch on the gifted cloaking technology, and in return, the Federation shared its intelligence on the Dominion with the Romulans.

Most cloaking devices need to be tied into a ship's deflector shield grid.

When activated, the cloaking device projects a field around the vessel in question, which selectively bends the path of light. This fools the sensors of other ships, and renders the vessel invisible and undetectable. Unless one has the exact frequency of the field, the ship is hidden from sensors.

The cloaking device of one ship can be expanded to cloak multiple vessels, though this can hinder the shield’s strength.

Some models have been documented as being able to work without being tied into any of the ship’s systems. These types of cloaking devices work by having a limited power supply of their own.

Important Note: Most vessels cannot use their weapons and deflector shields when cloaked.

Starfleet's earliest method of penetrating cloaks was developed in 2152, when a time-traveling Federation operative provided the Enterprise, NX-01 with 31st Century technology, for the specific use of locating a Suliban stealth-ship.

When the Romulan Bird-of-Prey crossed the Neutral Zone in 2266, Federation starships were able to pick up anomalies on sensors, later attributing these to the warped Romulan ship. By 2268, the Romulans fixed this error in their technology.

Klingon ships had a similar issue, and cloaked Klingon vessels were able to be detected by watching an area of space for energy distortions. In 2293, the Enterprise-A had developed a method of deploying photon torpedoes to track the plasma exhaust of a cloaked ship.

By the 24th Century, the Federation protected its bordered from cloaked Romulan ships by using a sensor net, later replaced by a tachyon detection grid.
This improved detection grid operated by using tachyon beams to transmit to different, randomized points in a grid, theoretically exposing any cloaked objects.

Note: Ships that were in the midst of cloaking or de-cloaking have been documented to create a build-up of tachyon particles.

The Dominion, as well as the Cardassians, also had many methods of breaking through cloaking fields, including long-range tachyon scanners and an antiproton beams.

The Dominion also possessed an array that could detect cloaked ships up to two light years away. They also employed the Federation’s technique of using tachyons, but in the form of active tachyon scans, also called tachyon sweeps.

Due to the enormous amount of power required to generate a cloaking field, there was generally not enough power available for cloaking shields, regular shields, and weapons. Historically, power was routed first to the cloak, and then to shields and weapons. This meant that while a ship was cloaked, they could not defend themselves using traditional shields, nor could they fire their weapons.

In 2293, the Klingon Empire developed a prototype Bird-of-Prey that was capable of firing weapons while cloaked. They used this prototype to fire on another Klingon ship, making it look like the USS Enterprise-A had fired on the ship.

The Treaty of Algeron did not stop Starfleet Intelligence from secretly and illegally developing the phasing cloaking device, which not only rendered a starship invisible, but also allowed it to pass through solid matter unimpeded.

In the 2360s, the Klingon Empire experimented with interphasic cloaking technology, but the research was abandoned due to several accidents.

In 2368, Romulans unsuccessfully experimented with interphase cloaking technology, developing a generator, combined with a molecular phase inverter. The device malfunctioned, and the ship sent out a distress signal, getting the attention of the Enterprise-D.

The cloaking device used to hide the planet Aldea caused significant damage to the planet's ionosphere and ozone layer. This led to increased radiation on the surface, and sterility among the Aldeans.

In 2371, chroniton particles generated by the Romulan cloaking device aboard the USS Defiant became lodged in the ship's ablative armor matrix. These particles interacted with the ship's transporter systems, resulting in the accidental transport of several officers backwards through time to early 21st century Earth.