Born in Greece on Earth, Christina was the youngest of three siblings in the Vallinakis household. Her older sister Anna was kind and caring, but she always challenged Christina to be better. Anna was bigger and taller, very athletic, she also got injured often because of her strong interest in sports. Her older sister's injuries and they way they healed were always of interest to little Christina. Her older brother Kosta teased her about it often, but that only served to push her further into this interest. With both parents working in the medical field, her love for medicine was nourished and allowed to naturally grow over the years. Her confidence in the medical field took a hit when her grandfather died. The helplessness she felt and the frustration at the doctor's inability to save him drove her to take a break from her pursuit. Eventually, with encouragement from her family, she resumed her studies and continued on to become a capable physician herself.

Christina was born to be a doctor. Both her parents were physicians so naturally she wanted to follow in their footsteps. She excelled at school in early age and was selected to join Star Fleet Academy's Medical Program soon after. Graduating at the top of her class, she began her career working in the Surgeon General’s office as a student intern. After that, she moved on to doing field work. With posts aboard some of the fleet's most famous ships such as the Copernicus, the Gettysburg and the Intrepid. Eventually, she served as the Chief Medical Officer aboard the Enterprise before assuming command of the USS Fleming, a hospital ship, during the events of the Krynar War. Her distinguished service during that time of crisis eventually landed her the position of the Star Fleet Surgeon General. With her career having turned a full circle, she was ready to take on a new challenge.

Academy Major(s): Medical Science
Academy Minor(s): Xenobiology, Pharmacology
Hobbies and Pastimes: Reading, classical music, an occasional glass of red wine with dinner
Short-Term Goals: Making an impact in her duty as Surgeon General of Star Fleet
Long-Term Goals: Lobbying Star Fleet to prioritize the creation of more of the Nightingale Class Hospital Ship to support the fleet.
Personality: Thoughtful, compassionate and easy going
Sense of Humor: Appreciates hearing a good joke, not so much telling one herself though.
Phobias: Spiders
Likes: Chocolate Ice Cream
Dislikes: Being caught unprepared
Pet Peeves or Gripes: Being underestimated
Bad Habits or Vices: A bit of a workaholic
Achievements: Becoming the Star Fleet Surgeon General and earning the Rank of Commodore
Disappointments: All the friends she had to say good bye to over the years. Particularly, those she lost during the war.
Illnesses: None
Strengths: The ability to see the big picture and think outside the box
Weaknesses: Wanting everything to be neat and organized all the time can be annoying to some people, including her own staff.
Fears: Star Fleet getting into a new war and being caught unprepared, particularity the Medical division.
Prejudices: Krynar
Off Duty Clothing Tastes: Elegant and tasteful dresses, she follows the latest sensible fashions and enjoys shopping trips to her favorite stores
Distinguishing Features: None
Pets: Dog; a male pug named Hercule.
Friends: Captain Gabriel Archer, Commander Dietrich Kaiser 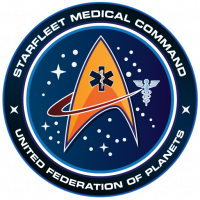 Most Painful Experience: Losing her parents.
Most Crucial Experience: Deciding to continue her pursuit of medical studies after the pain of losing her Grandfather.
Role Model: Doctor Leonard H. "Bones" McCoy