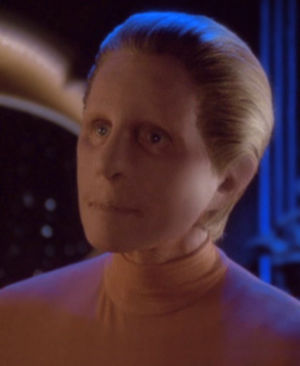 Changeling appearing as a female

Changelings were liquid shapeshifting lifeforms, native to the Gamma Quadrant. They were the creators and rulers of the Dominion, whose subject races knew them as the semi-mythical "Founders." Most Changelings existed as an amalgamated mass known as the "Great Link." One well-known member of this race is Odo, who was Chief of Security on Deep Space 9.

The natural form of a Changeling was a viscous orange liquid, which contained a structure known as a morphogenic matrix. They contained enzymes responsible for their shapeshifting ability. Changelings had to revert to their natural liquid state to regenerate every sixteen to eighteen hours. Preventing them from doing so would cause severe physical distress and their forms to begin to deteriorate and "flake" away. Even when in humanoid form, Changelings did not need to eat or drink, and had no sense of taste or smell. They could also transform parts of themselves into smaller electrical devices, like a combadge, and make it operational, and were also capable of at least mimicking the shape and operation of a computer. Changelings could survive in the vacuum of space, and were highly resistant to disruptor fire.

The thoughts and emotions of Changelings could not be read by Betazoids, though there was an apparent telepathic aspect to the Changeling species between each other. They subconsciously had a homing device towards their home, the Omarion Nebula. Changelings also had the ability to sense the presence of other Changelings, and they were absorbed into the collective mind once they joined with what they called the Great Link.

Centuries in the past, the Founders sent one-hundred Changeling infants throughout the galaxy, as a way to gauge other species by the way they treated the weak and vulnerable. It was suggested that Changelings were biologically immortal and therefore never died of old age. Changelings began their lives in an "infant" state, as a small quantity of seemingly inanimate liquid. In this state, they were capable of limited shapeshifting, usually into simple geometric shapes, and responding to external stimuli such as moving away from an electrical charge. Over time they developed into maturity, increasing in mass and gaining greater understanding of their surroundings and control over their shapeshifting abilities, eventually becoming capable of verbal communication and assuming complex forms. Despite the existence of infants, it was unknown how Changelings reproduced. 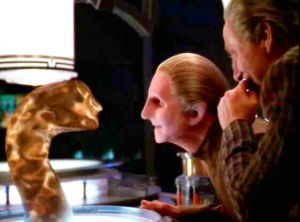