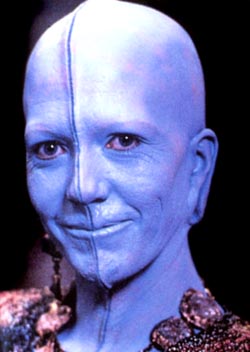 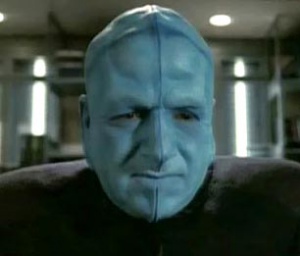 Note: This is a PC and NPC rated race

The Bolians are a humanoid species native to the planet Bolarus IX. They are a highly outspoken, most often at times when it is not requested. They are a member of the United Federation of Planets.

Bolians are distinctively known for a bifurcating, cartilaginous ridge running vertically along their heads, and half-way down their chest. Skin color ranges from blue-gray to vivid blue, and is occasionally accented with dark blue bands on their head. Bolian males are completely bald and are on average, as tall as, but less physically fit than, the average Human male. Bolian females are sometimes completely bald, and sometimes have hair. Male Bolians are known to wear toupées on occasion.

In addition to the ridge on their heads, they are also noted for having cartilaginous lining on their tongues that allowed them to consume foods not normally palatable by other Federation races, including strong acids. One such example of traditional Bolian cuisine was the consumption of meat that had been allowed to partially decay.

When removed from the body, Bolian blood is blue in color. The chemistry of their blood is very different from that of other species, especially Vulcans. If a blood transfusion was given from a Vulcan to a Bolian it would result in the death of the Bolian. There have been instances, however, when artificial blood was unavailable; when this occurs, existing blood cells are genetically altered for inter-species transfusions to be successful. Intimate relations between Bolians and Humans typically caused adverse effects to the latter, which might include fatigue, nausea, and joint inflammation.

By the 22nd century, the Bolians had limited contact with the Ferengi.

In 2366, the Bolian government was maintaining an uneasy truce with the Moropa.

By the 24th century, the Bolians were associated with the Federation, with several officers serving in Star Fleet in the 2360s and an active Federation ambassador by 2369.

Bolian territory was a hotbed between the Federation and the Dominion during the Dominion War. A front was established by the Sixth Fleet in 2374 to prevent Dominion forces from taking the Bolarus system and outlying colonies. Star Fleet developed a new strategy during the war on the Bolian front which was known as the Bolian Operation.

A Bolian medical philosophy on euthanasia was developed during their Middle Ages, known as the "Double Effect Principle". This form of assisted suicide states that the relief of suffering was acceptable despite that it has the effect of causing death.

Bolian courtship initiation is depicted as a male and female Bolian pressing foreheads with eyes closed, while both participants touch the neck of their partner with both hands, placing the fingers where one would check the pulse of a species with a circulatory system similar to that of humans.

Bolian marriages often involved more than two members. Any additional spouse is referred to as a "co-husband" or "co-wife", respectively.

Bolians believe that if one gives birth near a warp core, the experience improved the baby's disposition.

The human name Frederick bears a close resemblance to an impolite Bolian term.

The Bank of Bolias is the primary financial institute of the Bolians and many off-worlders. Fluctuations in Bolian currency play an important role in Alpha Quadrant trade.

In 2373, the Bolian government authorized the Ferengi Gaming Commission to manage their gambling emporiums.

The Bolians were among many Federation races that took advantage of the starbase Deep Space 9 and the Bajoran wormhole. By 2372, the Bolians had opened up a new restaurant on DS9's Promenade.

Bolian crystalsteel is a type of Bolian commodity.