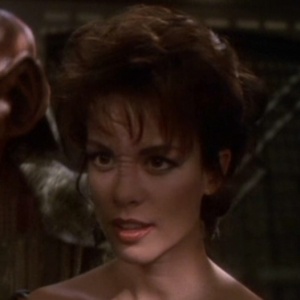 The Bajorans (also known by their native name, "Bajora") are a humanoid species native to the planet Bajor in the Alpha Quadrant. The Bajorans have one of the oldest and richest cultures in the quadrant, though in recent history they have suffered greatly at the hands of the Cardassian Union. With their liberation from the Cardassians and the discovery of the Bajoran wormhole, the Bajorans are taking a new place as major players on the interstellar stage.

Bajorans resemble Humans in appearance, but are distinguished by a series of four to seven horizontal creases across their noses. The Bajoran heart is mirrored along a horizontal axis, unlike the Human heart, which is mirrored along a vertical axis. A puncture in the lower ventricle of the heart will cause instantaneous death. Bajoran women gestate for only five months, forming an intricate network of blood vessels between the mother and the fetus. During the pregnancy, Bajoran women are frequently afflicted by bouts of uncontrollable sneezing.

Bajoran civilization stretches back more than half a million years, which is long before Humans learned to speak or make bone tools. The ancient Bajorans were renowned for their accomplishments in science, mathematics, philosophy, and the arts. The greatest of these early Bajoran civilizations was the First Republic, which flourished between 25,000 and 20,000 years ago. During this time, magnificent cities such as B'hala were built.

The next great phase of Bajoran civilization began approximately 10,000 years ago, when the first of the Tears of the Prophets were discovered above Bajor. These artifacts ushered in a new era of spiritual connection with the Bajoran gods, the Prophets. By the 16th century, the Bajorans had developed sublight space travel and were exploring their home star system with solar-sail spacecraft. Some Bajoran explorers even reached the Cardassia system several light years away. In the 24th century, this period came to an end with the annexation of Bajor by Cardassia.

The Occupation of Bajor (usually simply referred to as the Occupation) was the period from 2328 to 2369 during which the Bajoran homeworld of Bajor was under the control of the Cardassian Union. During the Occupation, the Cardassians perpetrated a coordinated scheme of strip-mining, forced labor, and genocide across the planet. The Occupation gave rise to the fierce Bajoran Resistance, which used guerrilla and terror tactics to eventually force the Cardassians to withdraw. Many Bajorans also fled the occupation and settled on planets all over the known galaxy, but almost everywhere they remained separated from other peoples, living under the poorest circumstances in refugee camps like those on Valo II.

In 2369, after nearly forty years of domination over Bajor, the Cardassians finally left, no longer willing to stand against the relentless terrorism of the Bajoran Resistance. As the Bajorans established an independent government, the United Federation of Planets moved into the system and, along with the Bajoran military, established joint control of Terok Nor, a mining station, which they renamed Deep Space 9. Bajor applied for membership in the Federation in 2373, but retracted their application at the last moment because their Emissary told them this would be disastrous for Bajor. The two governments maintained a cordial relationship, however.

It can be assumed that by Federation Space time, Bajor is a Federation member.

Following the Cardassian withdrawal from Bajor, the interim Bajoran Provisional Government was set up to administer the planet and its various colonies. Bajoran politics is balanced between the secular Chamber of Ministers, led by the First Minister, and the religious Vedek Assembly, led by the Kai. It is possible for one individual to be both the Kai and the first minister simultaneously, as Winn Adami almost was in 2371.

Use of terms such as "minister" and "province" suggests that Bajor was a monarchy in the years leading up to the occupation, although there has been no mention of any surviving royal family. 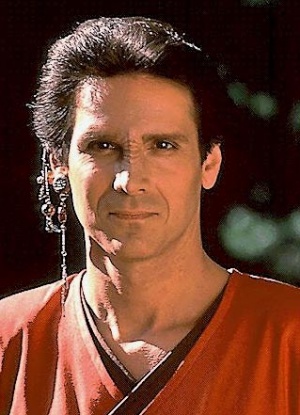 Bajoran custom places the surname (or family name) before the given name (Similar to the Chinese naming customs of Earth). Therefore, Major Kira Nerys would properly be addressed as Major Kira, not Major Nerys.

The traditional Bajoran birthing ceremony is attended by the woman's family and a midwife. The objective of the ritual is to induce complete relaxation through a combination of breathing exercises, rhythmic percussion music and incense, allowing the woman to give birth without pain. However, the birth must take place in a certain period of time, or the level of endorphins within the mother's system will build to toxic levels.

When the child is born into the world, he or she is greeted with the following words: "Awake child, we await you with love and welcome you into the world."

The Bajorans generally bury their deceased in graves marked with a decorated arch. Bajoran funeral rites can be quite elaborate; for example, the Bajoran death chant is over two hours long. However, the preservation of the body itself is not of particular significance to the Bajorans, who believe that after death a person's pagh joins the Prophets in the Celestial Temple, leaving only an empty shell. To mourn the death of a loved one, Bajorans light duranja lamps.

Bajor, as an advanced society, was well-known for its music both before, and after, the Occupation. The Jalanda Forum is a popular performance venue. The belaklavion is a Bajoran musical instrument.

The Bajorans have simple holographic technology, such as the ability to hide enterances with false holographic covers.