Mackenzie grew up on the planet of Dhar’hyyk, a planet consistent of snowy mountains and sweeping oceans, where the inhabitants live on floating colonies. From an early age Mackenzie was in awe of flying, partially because her father flew transport and partially of her own adventurous side, and earned a pilot’s license when she was only 10. Civil war broke out when Mackenzie was 15, and when Mackenzie turned 16, when she was old enough, she joined the Dhar’hyyk Air Force in the last year of the war. Mackenzie garnered numerous kills during the war, and earned the rank of Colonel and the position of Fighter Division Leader. She was also the Second in Command of the Dhar’hyyk Air Force.

During the war, her fighter was downed into the ocean. She was pulled from her sinking fighter by the enemy forces and taken to be tortured for information. Mackenzie managed to hold out against numerous experimental torture methods, having an unusual resistance to torture. She was eventually rescued by the Hero of Dhar’hyyk and her lover at the time, Paul Braggins.

After the war, Mackenzie applied to become an Instructor in the Air Force Academy as she found she had a knack for teaching, and was accepted immediately due to her high standing and talent. She fell in love with teaching and became one of the top instructors.

As seven years passed, Mac’s wanderlust and adventurous side took over. Following the lead of her close friend Paul Braggins, Mackenzie applied to Star Fleet. She was accepted soon after into the Fleet Fighter Corps. Because of her prior history and experience as a flight instructor, Mackenzie was the youngest person ever offered a position as a flight instructor and general examiner at the rank of Lt [JG].

During her time as an examiner on Starbase Alpha, Mackenzie ran into Paul again, who hand-picked her to be part of a new fighter squadron aboard the Federation’s flagship, the USS Enterprise CV-07. Mackenzie accepted, and was transferred to the Fighter Wing. Together with Paul they taught the squadron’s pilots new tactics and manoeuvres they had learned on Dhar’hyyk. Mackenzie was promoted to Lieutenant and made the position of Halo Squadron XO.

Their fourteen year on-again off-again relationship resparked, and soon after they became engaged. Mackenzie adopted Paul’s daughter Jenny, and they became a family when they were married aboard the Enterprise by then RAdm Thrawn.

In the months that followed news that the civil war on their home planet made its way back to Paul and Mackenzie. However this time there was a darker twist – the Romulans were secretly supply the Anti-Unification Alliance with the goods they would need to win. Star Fleet stepped in and set a force to help the rightful government retake the planet. Her husband was injured badly and put on medical leave, but there was some happy news – Mac was pregnant with their first child! The pair spent a month on leave in their small cottage in the Razgriz mountains on the now free Dhar’hyyk.

That, however, wasn’t the end of the Romulan threat. Due to his experience with the Romulans, Paul was offered the position of First Officer aboard the USS Ticonderoga. Because the Tico didn’t have a fighter division, Mackenzie transferred into the Engineering department at the rank of Lieutenant. While on the Ticonderoga, Mackenzie gave birth to their son – Paul Jr. 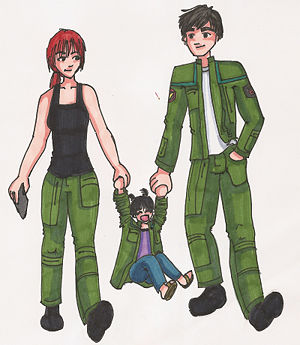 The Braggins Family. From left to right: Mackenzie, Jenny, Paul

When the Ticonderoga became the test platform for the new XF-2 Fighter, Mackenzie was promoted to Lieutenant Commander and assigned as Squadron Executive Officer, under Paul who took a dual-role as Ticonderoga First Officer and Squadron Leader. She remained in this position throughout the Romulan War, and into the uneasy peace that followed. Following her husband’s promotion to Captain, things between Mackenzie and Paul began to get tense and following a series of particularly nasty arguments, she took the children and left the Ticonderoga to live with her parents on Risa. They never arrived at their destination, as they were kidnapped and held hostage by an old enemy of Paul’s – remaining incarcerated for months until forces led by her husband freed her and the children. Paul and Mackenzie reconciled their issues following this, and Mackenzie took a desk job at Starfleet Tactical – soon finding herself promoted to Captain and assigned as Director of Flight Operations, overseeing pilots in all branches of Starfleet.

After several years at Star Fleet Tactical, Mackenzie found herself getting restless. She'd participated in several test programmes, but beetling round the Sol system no longer sated her desire to stretch her wings and soar. When long-time friend Myra Foxx turned down the offer to be the first permanent Wing Commander of the new Pioneer Outpost flying the equally-new Light Attack Craft, Mackenzie saw her opportunity and took it. Though she knew she'd be moving away from the children, both now in secondary education, it was an assignment that she had secretly longed for though she saw tensions would be high with Dhar'hyyk exile Captain Khumalo as the base's Chief Tactical Officer.

Academy Major(s): Advanced Aviation, Engineering.
Academy Minor(s): Small craft mechanics, Fleet tactics.
Hobbies and Pastimes: Playing the guitar and sketching.
Personality: Silly and outgoing when she wants to be, but also can be quiet and reserved. Tends to jump to conclusions at times.
Sense of Humor: Sarcastic, dorky
Likes: Flying; reading for hours non-stop curled up under a blanket; cooking home cooked meals.
Dislikes: Spiders; male pilots who think that female pilots aren’t as skilled aviators.
Bad Habits or Vices: Jenny bites her nails, a habit she picked up from her father.
Achievements: Graduating Flight School.
Disappointments: Not being able to return home to help fight in the civil war; Not being able to tell Paul how she truly felt about him, and having her leave her twice.
Illnesses: Was tortured with an unknown chemical compound that left scars on her torso that currently medical science cannot heal.
Strengths: Superior hand-eye coordination, excellent fighter pilot, uncanny ability to resist torture.
Weaknesses: Clumsy when not in the cockpit.
Fears: Paul leaving her again.
Off Duty Clothing Tastes: Relaxed and comfortable: jeans, tank tops, and sandals.
Distinguishing Features: A few small scars on her back that are unhealable due to the chemicals used when she was tortured at the age of 17. Also has a tattoo on her right shoulder blade of a two headed dragon clutching a lightning bolt, the symbol of the Dhar’hyyk Air Force.
Pets: None
Friends: Alexandra LaHaye

Most Painful Experience: Having her home world go to war, and having that war never really ending. Seeing her friends get killed. Paul leaving her not once, but twice.
Best Time: Her marriage to Paul Braggins.
Most Crucial Experience: When her father first nurtured her interest in aviation at an early age. When Paul pushed her to become an Aviation Instructor for the DAF. Applying and being accepted to Star Fleet.
Role Model: Amelia Earhart.