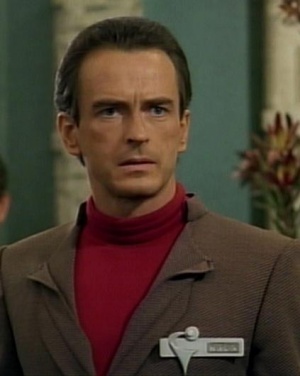 The Angosians are a humanoid species originating from the planet Angosia III. Outwardly indistinguishable from humans, Angosians eschewed violence, preferring to focus on intellectual development.

In the mid-24th century, the Angosians were involved in a protracted conflict called the Tarsian War. Being inherently non-violent, the Angosian authorities were forced to subject their soldiers to genetic engineering and chemical manipulation in order to successfully end the conflict. However, it was discovered that the process was irreversible, and when the war ended, the 'super soldiers' were unable to function within or co-exist alongside the normal population of Angosian society. As such, they were confined indefinitely to a penal settlement on an Angosian moon, Lunar V, and considered to be outcasts and criminals.

In 2366, the Angosians petitioned to join the United Federation of Planets. The USS Enterprise-D visited Angosia III to follow up the petition. However, following the escape of Roga Danar, a genetically engineered Angosian, and the resultant civil upheaval, the application was put on hold for the immediate future.

It is safe to assume that by Federation Space time, the Angosians have resolved their conflict and are part of the Federation.